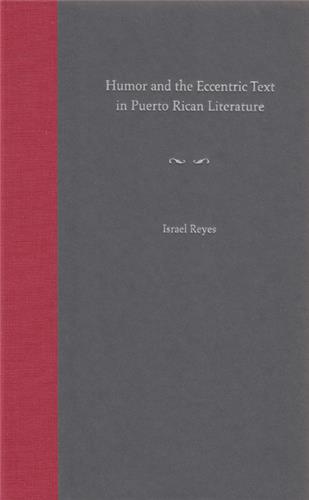 Humor and the Eccentric Text in Puerto Rican Literature

"An elegantly written, thoroughly researched, original study that takes the reader on an 'eccentric' journey back and forth across the Atlantic as it reads the trope of humor in 20th-century Puerto Rican literatures."--Lourdes Martínez Echazábal, University of California, Santa Cruz

Puerto Rican writers from the island and mainland have long used a variety of comic genres and forms to affirm an autonomous national identity and resist cultural hegemony and assimilation. The use of self-reflexive humor has allowed these writers to produce "eccentric texts" that reflect not only on their own textuality but also on their role as an intervention in the literary discourse on national identity. Reyes analyzes the works of Nemesio Canales, Luis Rafael Sanchez, Ana Lydia Vega, and Pedro Pietri to argue that their works resituate the parameters of national identity by blurring the lines between the subject and object of humor, the inside and outside of the text, and the here and there of the diasporic Puerto Rican nation.

Israel Reyes is associate professor of Spanish and Portuguese at Dartmouth College.

"A welcome addition to postcolonial and immigrant studies, and a must for those pursuing Puerto Rican studies . . . Essential." "Essential."
--Choice

…superb…offers a wealth of ideas to any scholar studying the theme of humour in contemporary literature…a major contribution to studies of Puerto Rican literature in the Enlglish-speaking world.
--Canadian Journal of Latin American and Caribbean Studies