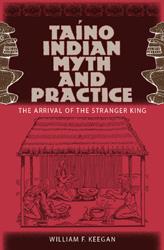 Taíno Indian Myth and Practice:
The Arrival of the Stranger King

"A path-breaking work, rich and mature, complex but readily accessible. It unites the many facets of . . . 25 years of innovative research and leads us out of the once-irresolvable dilemmas of contemporary archaeology."--Geoffrey W. Conrad, William Hammond Mathers Museum, Indiana University

"Charts a new course toward a broader understanding of Taíno society, myth, and archaeology at the dawn of the Spanish colonial period. His approach livens the archaeological record and illuminates our reading of the documentary record."--Dave D. Davis, Tulane University

Applying the legend of the "stranger king" to Caonabo, the mythologized Taino chief of the Hispaniola settlement Columbus invaded in 1492, Keegan examines how myths come to resonate as history--created by the chaotic interactions of the individuals who lived the events of the past as well as those who write and read about them. The "stranger king" story told in many cultures is that of a foreigner who comes from across the water, marries the king's daughter, and deposes the king. In this story, Caonabo, the most important Taíno chief at the time of European conquest, claimed to be imbued with Taino divinity, while Columbus, determined to establish a settlement called La Navidad, described himself as the "Christbearer."

Keegan's ambitious historical analysis--knitting evidence from Spanish colonial documents together with data gathered from the archaeological record--provides a new perspective on the encounters between the two men as they vied for control of the settlement, a survey of the early interactions of the Tainos and Spanish people, and a complex view of the interpretive role played by historians and archaeologists. Presenting a new theoretical framework based on chaos and complexity theories, this book argues for a more comprehensive philosophy of archaeology in which oral myths, primary source texts, and archaeological studies can work together to reconstruct a particularly rich view of the past.

William F. Keegan is curator of Caribbean archaeology at the Florida Museum of Natural History and professor of anthropology and Latin American studies at the University of Florida.

"Explores the intersection of myths, beliefs and practices among the different participants who have written this history."
--Times of the Islands

"A richly textured, deeply personal interpretation of one incident in Taino/Spanish contact relations, the capture and death of Cacique Caonabo, a principal chief of the Island of Hispaniola (now the Dominican Republic and Haiti) in 1494."
--Centro Journal

An excellent example of how oral traditions (mythology), historical sources, and archaeology can work together to provide richer, more complex views of the human past.
--Choice

"If you are into the history and archaeology of the natives who greeted Columbus, this is definitely your book."
--St. Augustine Archaeological Association

"In this bold and original study William Keegan crafts a complex narrative that combines archaeology, ethnohistory, ethnology, and linguistics to argue that a famous contact period Taino chief, Caonabo, originated from a specific impressive site, MC-6 on Middle caicos."
--Journal of Anthropological Research

"On the positive side, Keegan's discussion of the archaeological data of the Bahamian Archipelago in relation to Hispaniola provides an excellent, updated synthesis of important work that is not well known even among Caribbeanists."
--Cambridge Archaeological Journal

"A must read for all serious scholars of Caribbean prehistory and ethnohistory. Keegan skillfully plays documentary sources against the archaeological record to reveal the complex nature of Taino-Spanish interactions and the way mythology, both Taino and Spanish, structured those relations."
--New West Indian Guide

The People Who Discovered Columbus: The Prehistory of the Bahamas 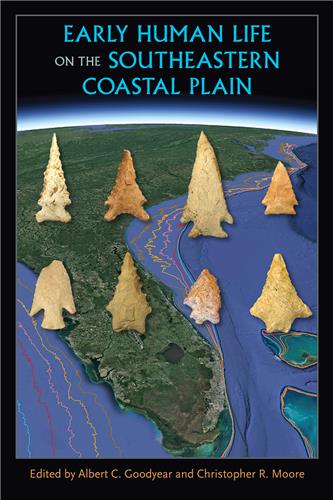