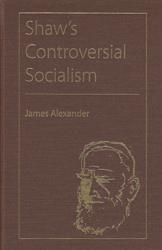 "A lively account of Shaw's arguments with liberals and Marxists."--Mark Bevir, University of California, Berkeley

"Expertly places Shaw in the context of the key political battles on the ground of the Victorian/Edwardian world. Those who have confined themselves to the standard biographies may be a little shocked by the detailed picture Alexander provides of how utterly involved Shaw was in trying to shape the political future of both Britain and Europe."--Richard F. Dietrich, series editor

Shaw's Controversial Socialism deals with the political writings of Bernard Shaw, with special emphasis given to the years between 1884 and 1904. It was in these decades that Shaw exhibited his greatest commitment to politics, particularly as he worked out his own unique approach to socialism.

Rather than attempt to re-create Shaw's political philosophy, James Alexander is the first to discuss Shaw's work by its placement on a continuum. Analyzing Shaw's writings in the political and historical contexts from which they sprang, Alexander shows that Shaw's was a reactive rather than proactive stance. Most notably, he reveals how Shaw defended socialism from the extremes of Marxism on one side and Liberalism on the other.

Alexander's background as a historian of political thought makes him ideally suited to undertake such a study. It will appeal to both literary critics, who will be better able to understand the milieu in which Shaw's dramas arose, and political scientists and historians, who will be more fully exposed to a key figure in the political battles of the Victorian and Edwardian worlds.

"This cogent, well-executed study argues that Shaw's distinctive brand of socialism has its conceptual roots in the shadowy interstices between liberalism and Marxism."
--CHOICE

"Offers a refreshing, at times startling, look at some unfamiliar Shaw writings and provides a rare glimpse at the political animal lurking behind the puckish GBS persona."
--English Literature in Transition