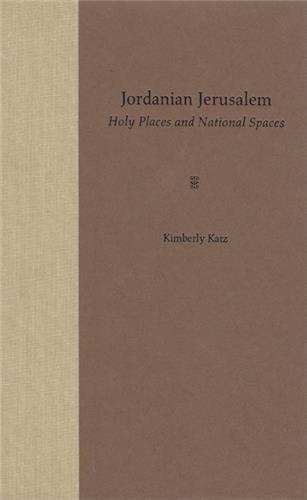 "Offers several original contributions to the field. . . . It is the only major study of Jerusalem during the period of Jordanian rule, in marked contrast to the many studies on the city under Ottoman and Israeli rule. This work also adds to our understanding of Jordanian history generally and of the manufacturing of Jordanian political identity in particular.”--Michael Fischbach, Randolph Macon College

"Successfully portrays the modern construction of nation and nationalism and the use of symbolism in the process. It provides an example of political realities imposed from above through the power of continued Western manipulation in the fate of the Middle East region and its people.”--May Seikaly, Wayne State University

Kimberly Katz explores the role of Jerusalem’s holy places in the process of creating a distinct national identity in Jordan from 1948 to 1967. The time period marks Jordan's control over Jerusalem, including the Muslim, Christian, and Jewish holy sites in the Old City. Katz shows that the governing Hashemite leaders co-opted the religious importance of Jerusalem to refashion Jordan’s image following the 1948 War in Palestine around the holy places, located in the newly enlarged kingdom.

The Hashemites faced serious questions about their political legitimacy after being installed by the British as rulers in a demarcated region that had no historical precedent as a political entity. To promote their own legitimacy and that of the newly created state, the leaders employed state-issued cultural artifacts to define both the state and the nation. With the support and blessing of the West, they not only exploited the traditional religious appeal of Jerusalem in speeches and public discourse, but also designed modern symbols of the nation such as stamps and currency with markers of holiness. The monarchy assumed and projected one overriding posture throughout this period: guardianship of the Holy Land. Katz explores the lingering presence of the British in Jordan, while giving life and color to the contributions of Hashemite leaders such as Sharif Husayn, King Abdullah I, and King Hussein. She also traces the ways in which state officials carefully promoted the new political identity to their subjects, to other Arabs, to Muslims elsewhere, and to the world at large.

One of very few books on Jordanian Jerusalem, this is the first that deals with the intersection of religious symbols, legitimacy practices, and nationalism through the framework of cultural history.

Kimberly Katz, assistant professor of Middle Eastern history at Towson University in Maryland, has published articles in The Muslim World and Comparative Studies in South Asia, Africa, and the Middle East, as well as in The Jerusalem Quarterly File.

In this rich and well-researched study, Kimberly Katz has brought to the fore many neglected elements in this tension and also added significantly to our knowledge of a neglected part of the history of Jerusalem.
--International History Review

…one of the best and most innovative books on Jordan to have emerged in recent years.
--H-Net, H-Levant

…provides an expansive regional overview of the relationship between state and non-state bodies, while affording a scholarly insight into alternative mechanisms active in the formation of identity during a period of national upheaval.
--American Journal of Islamic Social Sciences

"Adds to our knowledge of the modern history of Jerusalem and Jordan. . . .Well conceived, and it represents a point of departure for future research on this topic."
--International Journal of Middle East Studies