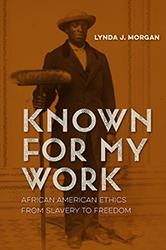 Known for My Work: African American Ethics from Slavery to Freedom

In Known for My Work, Lynda Morgan looks beyond slavery’s legacy of racial and economic inequality and counters the idea that slaves were unprepared for freedom. By examining African American social and intellectual thought, Morgan highlights how slaves built an ethos of "honest labor" and collective humanism. As moral economists, slaves and their descendants insisted that economic motives formed the foundation of their exploitation and made sophisticated arguments about the appropriate role of labor in a just and democratic society.