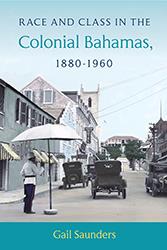 In this one-of-a-kind study of race and class in the Bahamas, Gail Saunders shows how racial tensions were not necessarily parallel to those across other British West Indian colonies but instead mirrored the inflexible color line of the United States. Proximity to the U.S. and geographic isolation from other British colonies created a uniquely Bahamian interaction among racial groups. Focusing on the post-emancipation period from the 1880s to the 1960s, Saunders considers the entrenched, though extra-legal, segregation prevalent in most spheres of life that lasted well into the 1950s.