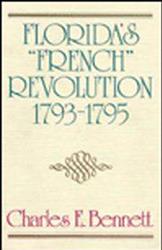 Two hundred years ago in Florida, the valleys of the St. Marys and the St. Johns seethed with intrigue as a band of settlers audaciously conspired to overthrow the Spanish colonial government. Long a specialist in Florida history, Congressman Charles E. Bennett in this book traces France's attempt to gain control of Florida in 1793-95 by supporting this abortive rebellion.

From a wilderness inhabited only by Indians Florida evolved into a region of wealth in Indian trade and one of political importance to rival European factions. Discovered by Spain in the early sixteenth century, Florida's northern frontier was colonized in the late 1700s, mainly by Anglo-Saxons who were unhappy living under Spanish rule.

Initially supported by the French, a group of the colonists plotted a revolt, which was officially repudiated by France in 1794 when its governing power changed hands. The Anglo-Saxons continued the conspiracy, quietly encouraged by the French. Eventually arrested and tried by the Spanish, many of these men were landowners who had sworn loyalty to Spain. Bennett has recreated this intriguing scenario through translations of the original Spanish documents of the criminal proceedings against these revolutionaries and through their personal correspondence.

Bennett places these events in the contemporary scene of European and American affairs: the United States playing the careful and ambiguous role of a neutral, marking the beginnings of an American foreign policy; France, in revolt at home and at war with Spain, struggling to gain a foothold in the New World; and Spain, trying to maintain its weakening hold in North America. The territorial ambitions of these three nations mirrored ideological and political conflicts in Europe and helped to shape the two-party system in the United States.