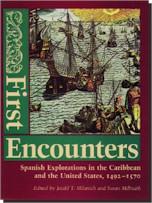 First Encounters:
Spanish Explorations in the Caribbean and the United States, 1492-1570

"An excellent paradigm of what historical archaeology and history have to offer in illuminating out past. Skillfully edited…Milanich and Milbrath have impressively skimmed the cream of the past decade of research."--Bruce D. Smith, Smithsonian Institution

Drawing on the most recent historical and archaeological research, First Encounters describes the period of early Spanish contact with New World peoples. This series of highly readable essays reports original research and investigations mounted over the last ten years, a decade of remarkable breakthroughs in our knowledge about significant events in the first decades after 1492.

In nontechnical language the authors invite us to play Watson to their Sherlockian investigations. We are made privy to the modus operandi of anthropologists, archaeologists, and historians as they assemble clues from historic documents, topographic features, and excavated artifacts to map out the neighborhood boundaries of Puerto Real, Hispaniola, abandoned in 1578, or to establish which sites in the southeast United States can legitimately claim that “de Soto slept here.” We learn how Columbus’s ship Niña must have smelled on her 1498 voyage, how the discovery of a pig mandible helped nail down the site of Anhaica, de Soto’s 1539-1540 winter camp.

Over 150 illustrations of rare artifacts and an extensive bibliography enrich this entertaining and informative volume, which introduces the Columbus Quincentenary Series, a scholarly celebration of the 500th anniversary of Columbus’s voyages.

Jerald T. Milanich is curator and Susan Milbrath assistant curator at the Florida Museum of Natural History in Gainesville.

Laboring in the Fields of the Lord: Spanish Missions and Southeastern Indians
Tacachale: Essays on the Indians of Florida and Southeastern Georgia during the Historic Period
Archaeology of Northern Florida, A.D. 200-900: The McKeithen Weeden Island Culture
Famous Florida Sites: Mt. Royal and Crystal River
Hernando de Soto and the Indians of Florida
First Encounters: Spanish Explorations in the Caribbean and the United States, 1492–1570
Florida's Indians from Ancient Times to the Present
Archaeology of Precolumbian Florida
Hidden Seminoles: Julian Dimock's Historic Florida Photographs
Enchantments: Julian Dimock’s Photographs of Southwest Florida
Archaeology of the Everglades
Florida Indians and the Invasion from Europe

First Encounters: Spanish Explorations in the Caribbean and the United States, 1492–1570