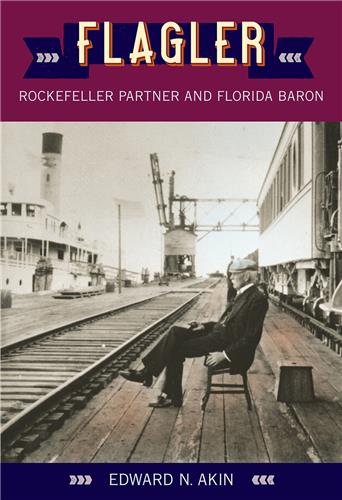 
From reviews of the first edition:

"An important contribution to the understanding of Standard Oil's extended partnership and how the personal desire of Flagler led to the early development of Florida's Atlantic Coast."--The Historian

Henry M. Flagler (1830-1913), the ambitious Gilded Age tycoon who designed and built much of Florida's fashionable east coast, rode to success on the rails.

lagler drove himself as hard as he drove a bargain, obsessed with the desire to create a monument to himself that he called "my domain." His legacy was no less than modern Florida. In 1885, at the age of fifty-five, he turned his attention away from Standard Oil and began construction of the Ponce de León luxury hotel in St. Augustine, the city where he had honeymooned with his second wife. Realizing he could never fill its rooms unless better transportation with the North was available, he embarked on the second railroad venture of his lifetime, creation of the Florida East Coast Railway.

Flagler's resort empire eventually included The Breakers in Palm Beach and the Royal Palm in Miami; his Atlantic coast railroad extended all the way to Key West, an engineering achievement that was called the "eighth wonder of the world." By the beginning of the twentieth century, Flagler dominated not just the resort and railroad industries in Florida but steamship and agricultural operations, too. Florida politicians gave his projects preferential treatment, even changing the state's divorce law so he could marry for a third time.

Woven into this biography are details about Flagler's family, personality, three marriages, alienation from his only son, and devotion to the Presbyterian church--copy that fueled society gossip columns from New York to Palm Beach for decades.

Edward N. Akin, author of Mississippi: An Illustrated History and other works on southern history, taught at Mississippi College in Clinton. His biography of Henry Flagler won the 1985 Phi Alpha Theta manuscript prize.