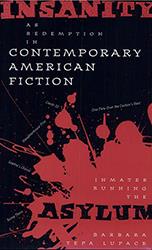 "The first complete account of how five key novels of the 1960s and 1970s emerged from their culture; never before has a critic studied the context of their creation so thoroughly and with such insight."--Jerome Klinkowitz, University of Northern Iowa

"Incisive, sophisticated and accessible treatment of five major contemporary American novels. . . . A significant addition to the body of literary and cultural criticism, providing a new focus and innumerable original perceptions about these works and, by extension, American literature and society since World War II."--Barry H. Leeds, Central Connecticut State University

Although madness is a popular theme in literature, contemporary American writers use that theme in a new and unfamiliar way, not just to convey the result of an unnerving or infuriating reality but also to comment on its hypocrisies.
Barbara Tepa Lupack examines the cultural and literary contexts of five major works of contemporary fiction: Joseph Heller's Catch-22 (1961), Ken Kesey's One Flew Over the Cuckoo's Nest (1962), Kurt Vonnegut's Slaughterhouse-Five (1969), Jerzy Kosinski's Being There (1971), and William Styron's Sophie's Choice (1979). She shows that each book is complex, with deep roots in American political reality, and each portrays a protagonist who is mad or is considered to be mad--but who reveals a special insight into the dangers of social, political, and cultural conformity. Each of these characters dwells in a sort of wasteland, ranging from the corrupt military base of Pianosa to the plastic suburb of Ilium, from the Nazi death camps to the ravaged Eternal City and bombed-out Dresden. All seek confirmation of their authenticity, and all offer social and ethical remedies that challenge bureaucratic institutions--solutions that amount to inmates running the asylum.
Lupack probes each novelist's life and public statements (in letters, interviews, and commentaries) and builds on earlier criticism of their works. Authoritative enough for specialists in literature and American culture, Insanity as Redemption will also interest general readers.

Barbara Tepa Lupack, formerly academic dean at Empire State College/SUNY and Fulbright professor of American literature in Poland and France, directs a small literary press and edits The Round Table. She is the author of numerous articles and books, including Plays of Passion, Games of Chance: Jerzy Kosinski and His Fiction, and Inside the Kaleidoscope: Kosinski's Early Novels, and she is the editor of Take Two: Adapting the Contemporary American Novel to Film.