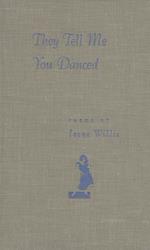 They Tell Me You Danced

"Tenderness and precision illuminate Irene Willis's record of family lives: the father who drank and was adored, the 'hello doll' mother who could do a mean Charleston, the defiant, funny, needy child, the woman she became--dancing in her turn like her mother. Aging in her turn. These are charming, sad, ultimately celebratory poems."--Alicia Ostriker

"Irene Willis evokes childhood's fire and loss with precision and authority. These poignant poems are a reenactment of the family drama: the female child echoing her mother's comforting, not surprising song, at the same time she is drawn irresistibly to the dangerous other, the father."--Elaine Terranova

"This is a wonderful book, in which those griefs and grievances that can overwhelm a life take, instead, their places as part of the dance; its song weds wisdom and gaiety as only a mature and richly experienced life can."--Linda McCarriston


In this first collection of her poems, Irene Willis takes the ordinary stuff of life--a childhood in New York, an adored father who drank too much, a mother's slow decline and death, a second love and marriage--and transforms it into unforgettable poetry. She was born a poet, one of those children who hang around adults avidly waiting for stories. In the poem "Fat Arms,"

Go out and play, my mother would say.
But I wanted to listen
for what my friends and I would do
later down in the street
when we had on our mothers'
old dresses and high heels,
a circle of rouge on each cheek,
giant pocketbooks under our arms.

In that image from the child's point of view--"giant pocketbooks"--Willis opens our own memories of that sweet, uneasy time. She, too, hated the barber, worshipped her grade-school teachers, and was tender to ladybugs; these emotions are evoked with childhood's intensity and presented in rich detail and with a sense of humor rare in modern poetry: "Grandma wanted to / shake Florence until / the raisins rattled / in her rice-pudding / brain" (from "Aunt Florence Always Wore Pastels").
The third section, poems about her mother's decline and death, is a tour de force. These poems should be gloomy, but they are not. Because there is so much love between mother and daughter and so much love of life in both of them, the poems, like the people, refuse to sit down and cry. Here is an excerpt from "Dancing Feet":

I want my dancing feet, my mother said
. . .
This was the lady who used to do the shimmy
and the Charleston, who fox-trotted her way
into one marriage and out, then met another
husband at a dance and took the measure
of him by his two-step.
I stood up, moved to music for her,
swinging into an elegant solo dip
worthy of chiffon, rhinestones, marcel wave.
She bobbed and clapped.

From the last section, a tribute to love come upon in middle age, this poem, quoted in full, gives some idea of the power of the poet's imagination and the grace of her diction:
On Dingle

Walking away from the burden of who I am
down a dirt road on Dingle, I see myself.
I see us, you and me, from the back.

I see our packs, bulging with the oddments
of our profession of being who we are
the ones who carry ourselves wherever we go.

Wild thyme scents the air; small black flies
circle our heads; the dirt underfoot is quiet.
Stealthily, we walk past a farmhouse, a fence.

A dog comes out, barking in Mother Goose.
The road is a lane, the gate a stile
and you, whose head is a foot above mine

in your separate packet of purple-scented air,
are my fancy. I am your locket, your love
your tuffet, your curds, your whey.

The Ireland of our fathers, yours and mine,
waits like a pocket, open to catch us,
plucked from the lane like two pennies.

Irene Willis was born and grew up in New York City. She now lives in Princeton, New Jersey, where she directs a poetry reading series for the Arts Council. Her poems have appeared in Crazyhorse, Laurel Review, Literary Review, New York Quarterly, and other journals and magazines.