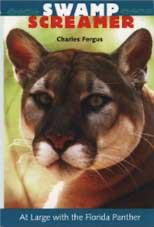 Swamp Screamer:
At Large with the Florida Panther

"Whether the panther survives or perishes, Fergus has written a book that does it full justice. His narrative is lively and full of anecdotes, some of them eye-openers."--Jonathan Yardley, Washington Post

"As good as, or better than, any book I’ve read in years about the awful and willful ignorance of homo sapiens about the living world."--Farley Mowat, author of Never Cry Wolf

"Charles Fergus [is] a diligent reporter and straightforward writer. . . . You will enjoy [his] descriptions of forays into panther territory."--Kathleen Krog, Miami Herald

The Florida panther is an endangered species, its way of life altered by the spread of suburban culture across the state. In Swamp Screamer, Charles Fergus tracks the fifty or so panthers that survive in Florida, vividly describing the people trying to save these remarkable creatures--including wildlife biologists trying to preserve panther habitat and radical animal lovers who regard the panther as a symbol of their crusade on behalf of nature. Swamp Screamer is a surprising and often comic look at the wildlife movement today; it is also an evocative history of the vanishing wilds of Florida and a deeply affecting portrait of the panthers themselves.

Charles Fergus has written six books, including the novel Shadow Catcher; a collection of essays, The Wingless Crow; and a memoir, A Rough-Shooting Dog. He lives in a stone house that he built himself on a mountainside in central Pennsylvania.

"The book is written with the grace and power appropriate for the subject."
--St. Petersburg Times

"This book about every aspect of the life of the Florida panther gets the highest praise of any wildlife book on the panther that we have ever read." "May this book sound a wake-up call to further protect this beast of beauty."
--Winter Haven News Chief

"Whatever the cause, the Florida panther has become a symbol of the state's struggle to hang on to its dwindeling wilderness, at the same time becoming the subject of debate on how best it can be saved. "In his book Swamp Screamer, Charles Fergus details that struggle with a combination of humor, good writing and solid reporting."
--Lake City Reporter

"A book that Floridians will find a handy layman's guide to the panther is Swamp Screamer: At Large with the Florida Panther by Charles Fergus." "Charles Fergus offers a clear and compelling overview of the Florida panther's plight, easily understandable to the non-scientist."
--Stuart News

"Fergus . . . delivers the good news and the bad news about the Florida panther with such dispassionate intelligence that I found myself utterly engrossed and simultaneously enlightened. This book is relentlessly fascinating." -- Tallahassee Democrat
--Tallahassee Democrat