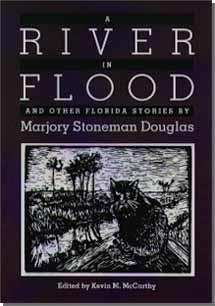 "Written as entertainment for a mass market . . . crammed with colorful characters, vivid incidents and palpable atmosphere. . . . A reminder of a Florida gone by or fast disappearing."--Orlando Sentinel


In the pantheon of Florida writers, Marjory Stoneman Douglas (1890-1998) is cherished as the grande dame. Famous as the author of The Everglades: River of Grass, prolific as a writer, and passionate as an environmental crusader for almost a century, she became the nation's best link to a remarkable era in Florida history.
The timeless themes of her stories in this new collection resonate with interest for readers today. Whether the subject is hurricanes, cockfighting, real estate deals, struggling immigrants, or corruption in the Everglades, Douglas wrote about it with distinction--and usually first. Originally published in the Saturday Evening Post during the 1920s and 1930s, the golden age of the short story, these nine works have never before been collected or available in one place.
Kevin M. McCarthy, who edited the companion volume, Nine Florida Stories by Marjory Stoneman Douglas, offers an introduction to each story, explaining its significance, setting, unusual references, place in Douglas's works, and significance to the history of South Florida.

The stories:
"At Home on the Marcel Waves"
"Solid Mahogany"
"Goodness Gracious, Agnes"
"A River in Flood"
"The Mayor of Flamingo"
"Stepmother"
"You Got to Go, But You Don't Have to Come Back"
"High-Goal Man"
"Wind Before Morning"

"All these tales have things to say about who we are and why we choose to live here. At her best, Douglas is a ripsnorting yarn-spinner. . . . What these stories best bring out for today's readers is a dear, sweet nostalgia for a South Florida which, like Douglas herself, is now lost to all of us." -- Miami Herald
--Miami Herald

"Should solidify Douglas's place as a chronicler of both humans and nature and serve as a reminder that the state now synonomous with retirement communities was once 'a wide, dreaming country.'" -- Publishers Weekly
--Publishers Weekly

"Douglas wasn't a one-book wonder. She wrote all of her life, left a body of work that is especially interesting because it often provides a peephole into another Florida, the land boom, loss of wilderness, the struggle of immigrants, corruption, development deals, folkways. . . . The stories in A River in Flood have not been collected before and, for almost all readers, will be new and will offer a new perspective on Florida in the 1920s and 1930s, and on the popular short story in the era that has been called the golden age of the short story. . . , good reads for more reason than plot and character."
--The Florida Times-Union

"In these tales, the passionate environmentalist and author of The Everglades: River of Grass writes about hurricanes, cockfighting, real estate, immigrants and, of course, the corruption in the Everglades. Her fictional voice flows as strongly for readers today as it did in the 1920s and '30s, when these stories were first published in the Saturday Evening Post." -- St. Petersburg Times
--St. Petersburg Times

"If you love Florida, this book is for you. . . . If you have a concern for the environment, a love for Florida or simply enjoy a good story you will want this book."
--Leesburg Daily Commercial

"An excellent introduction to the grande dame of environmentalists."
--St. Petersburg Times

"A charming collection of tales by the famed chronicler and defender of the Everglades. . . . The author had a keen eye for detail and a discerning ear for dialogue. These little stories are gems, as entertaining to the modern reader as they must have been when first published. In addition, they offer glimpses into Florida lifestyles of an era that is fast fading from memory."
--Stuart News

"These well-crafted stories take place in Miami, Palm Beach and in that river of grass, the Everglades. The writing is rich in detail and vividly recalls the South Florida of 70 and 80 years ago. Douglas captures the area in all its rawness as well as with the pretensions of the well established inhabitants. . . . But these delightful and entertaining stories also stand on their own, possessing that universal quality that transcends time and place." -- Tallahassee Democrat
--Tallahassee Democrat

"Whether standing on the edge of the Florida wilderness, or strolling down the "Art deco" avenues of Miami, Marjorie Stoneman Douglas captured every nuance of life in the 1920's and 30's. . . . This is a masterpiece, a classic. Give it a place of honor in your collection of Floridiana books. It deserves it." -- Florida Frontier Gazette
--Florida Frontier Gazette

"The best stories of this group, 'Mayor' and the title piece are as good as Marjorie Kinnan Rawlings' short story, 'Gal Young 'Un,' the O. Henry Prize winner of 1933 (made into a film by Victor Nunez). For those who think of Ms. Douglas as caring mainly about palm trees and alligators, 'A River in Flood' discloses that she was also concerned about how people treated each other. In her later years Ms. Douglas didn't continue to publish fiction, so this early undeveloped talent is what we are left to sample." -- Florida Folklore Society
--Florida Folklore Society