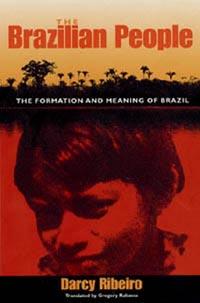 The Brazilian People:
The Formation and Meaning of Brazil

"[This] new book by Darcy Ribeiro . . . is the corollary of an effort that began long ago, untiring and coherent, destined to recognize the anonymous heroism of mulattos and caboclos . . . children of blacks and Indians, taken prematurely in the name of civilization . . . a rare existential vibration."--translated from Jornal do Brasil, Rio de Janeiro

"Must reading for Brazilianists as well as Latin Americanists in general."--Maxine L. Margolis, University of Florida, author of Little Brazil: An Ethnography of Brazilian Immigrants in New York City

From the foreword:
"Closes the chapter on a scholarly tradition dating back to the 16th century of works that sought to document and portray the complex and volatile reality of Brazil’s national identity as a product of its ethnic roots. . . . Contradictory patrician that he was, Darcy Ribeiro bequeathed good works with a conscience lightened by a delightful sense of humor and a distinctly poetic style."--Elizabeth Lowe, University of Florida, translator of Darcy Ribeiro’s novel The Mule

This is the first English-language translation of the culmination of the life work of Darcy Ribeiro, one of Brazil’s leading 20th-century intellectuals, known internationally both for his work in Indian affairs and for his political activism. First published as O Povo Brasileiro in 1995, two years before Ribeiro’s death, it quickly became a controversial best-seller.

Offering a sweeping overview of the ethnic, racial, and social forces that shape Brazilian culture and society, the book presents no less than an aesthetic of the Brazilian people as a whole. While Ribeiro dwells on the paradox of Brazil as a country of immense potential hindered by racial and class prejudice, he also believes it is "the most beautiful and luminous province on earth."

Elegantly translated by the acclaimed Gregory Rabassa, this work does justice to Ribeiro’s original Portuguese text, with all its idiosyncrasies, intrinsic poetry, epic hyperbole, and departures from contemporary U.S. norms of political correctness. It will be of immense significance to all those interested in Latin American culture, anthropology, sociology, and history as well as in the theory of culture.

Darcy Ribeiro (1922-1997), prominent Brazilian statesman, politician, educator, and anthropologist, is the author of an extensive body of literature on ethnography, as well as novels and works of history and political culture. His 30 books have been published in 10 languages and total some 200 editions. From 1983 to 1987, he was governor of the state of Rio de Janeiro, and in 1990 he was elected senator of the republic. He was a member of the Brazilian Academy of Letters.

Gregory Rabassa, winner of the National Book Award for his translation of Hopscotch, by Julio Cortazar, is an internationally acclaimed translator of the Latin American writers referred to as the "Boom" generation. He is professor emeritus at Queens College of the City University of New York.

" A synthesis and valedictory address for a long and brilliant career as a public intellectual. An important synthesis of some of the major ideas that shaped the intellectual discourse of twentieth century Brazil, and the life of one of Brazil's greatest intellectuals." - The Americas
--The Americas

"brilliant, lucid, and original." "Ribeiro has compiled a bittersweet, historically based anthropology of Brazil that tugs at the heart. There is genius at work here, genius of the modern kind." - Review- Latin American Literature and Arts
--Review- Latin Am Lit and Arts

"Ribeiro's important book is his attempt to define "Brazil and the gestation of the Brazilians," a culture he saw as a "renewed mutant, expressing its own characteristics but genetically tied to its Portuguese origins, which involved unsuspected potential for existence and growth that would only be fully realized here." -Publishers Weekly
--Publishers Weekly

"Brilliantly translated by Gregory Rabassa, this highly readable and enjoyable book marks the end of a grand tradition that encouraged Brazilians to understand their country as a product of its ethnic roots. For Ribeiro, Brazil was the "most beautiful and luminous province on earth" but was cursed by its history of class and ethnic antagonism." -Foreign Affairs
--Foreign Affairs

"Summarizes his 30 previously published books and brings insights to a vast array of topics ranging from slavery to race relations to the continued use of violence by the ruling class to maintain power." -Choice
--Choice