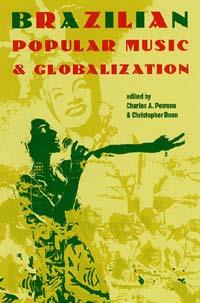 Edited by Charles A. Perrone and Christopher Dunn

"With an impressive variety of essays from some of the major scholars in the field today, this collection is an important contribution to the study of contemporary Brazilian popular music."-- Randal Johnson, University of California, Los Angeles

This illustrated collection of essays devoted to the international character and appeal of Brazil's song and dance music includes contributions from scholars in the fields of ethnomusicology, cultural studies, literature, anthropology, sociology, and communications; roughly half are from the United States and half from Brazil and elsewhere.

The introduction, "Chiclete com Banana," provides historical context for the studies that follow, which include an article by Caetano Veloso, the intellectual pop star who has been a towering figure on the Brazilian music scene for decades.

Contents
1. "Chiclete com Banana": Internationalization in Brazilian Popular Music, by Charles A. Perrone and Christopher Dunn
2. Carmen Mirandadada, by Caetano Veloso
3. Myth, Melopeia, and Mimesis: Black Orpheus, Orfeu, and Internationalization in Brazilian Popular Music, by Charles A. Perrone
4. Tropicália, Counterculture, and the Diasporic Imagination in Brazil, by Christopher Dunn
5. Globalizing Caetano Veloso, by Liv Sovik
6. Cannibals, Mutants, and Hipsters: The Tropicalist Revival, by John Harvey
7. Defeated Rallies, Mournful Anthems, and the Origins of Brazilian Heavy Metal, by Idelber Avelar
8. The Localization of Global Funk in Bahia and in Rio, by Livio Sansone
9. World of Fantasy, Fantasy of the World: Geographic Space and Representation of Identity in the Carnival of Salvador, Bahia, by Milton Araújo Moura
10. Songs of Olodum: Ethnicity, Activism, and Art in a Globalized Carnival Community, by Piers Armstrong
11. "Fogo na Babilônia": Reggae, Black Counterculture, and Globalization in Brazil, by Osmundo de Araújo Pinho
12. Reggae in Bahia: A Case of Long-Distance Belonging, by António J. V. dos Santos Godi
13. Black or Brau: Music and Subjectivity in a Global Context, by Ari Lima
14. Turned-Around Beat: Maracatu de baque virado and Chico Science, by Larry Crook
15. Self-Discovery in Brazilian Popular Music: Mestre Ambrósio, by John Murphy
16. "Good Blood in the Veins of This Brazilian Rio," or a Cannibalist Transnationalism, by Frederick Moehn

Charles A. Perrone is professor of Portuguese and Luso-Brazilian literature and culture at the University of Florida. He is the author of Masters of Contemporary Brazilian Song: MPB 1965-1985 and Seven Faces: Brazilian Poetry since Modernism and the coeditor of Crônicas Brasileiras: Nova Fase (UPF, 1994).

Christopher Dunn, assistant professor of Spanish and Portuguese and of African-African diaspora studies at Tulane University, is the author of a forthcoming book on Tropicália, the celebrated cultural movement in late 1960s Brazil.

"the full verdict on globalization and Brazilian popular music is not yet in. But this fine volume of clear, well-edited essays has contributed all that a single book possibly could to an over-all assessment." - The Americas
--The Americas

"Important not only for fans of Brazilian or even world music, but for everyone interested in Brazilian popular culture and society in general. An extremely valuable contribution to the study of the complex and rich tradition of musical practices in Brazil." - Luso- Brazilian Review
--Luso-Brazilian Review

"An important contribution to the study of Brazilian music and Brazilian culture for both those familiarized with the country and those who wish to become acquainted with the cultural diversity of Brazil."
--Arizona Journal of Hispanic Cultural Studies

"Obviously a book that Brazilianists, popular music scholars and students of cultural studies will find useful."
--British Journal of Ethnomusicology