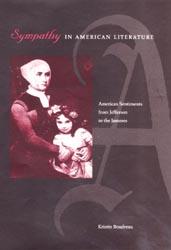 Sympathy in American Literature:
American Sentiments from Jefferson to the Jameses

"Impeccably, lucidly, and accessibly written . . . will contribute significantly to our understanding of an important intellectual 'thread' in American cultural and literary history."--Leland S. Person, University of Cincinnati

"A coherent and helpful account of the history of attachment and sentimentality from the seventeenth to the nineteenth century . . . that persuasively tracks a very powerful set of writings and enlivens the recovery projects currently occupying a number of scholars in the fields of American literature and culture."--Shirley Samuels, H. Fletcher Brown Professor of the Humanities, University of Delaware

In this chronicle of the role of sympathy in American literature and culture from the colonial period to the Gilded Age, Boudreau shows how the sentiment of fellow-feeling was repeatedly recruited at moments of national and personal crisis.

Unlike many treatments of attachment and sentimentality, this book avoids positing either the radical or the conservative account of sympathy. Drawing on a range of texts from John Winthrop's 1630 "Model of Christian Charity" to William James's 1902 Varieties of Religious Experience, the work explores the entire complicated legacy of sympathy in American culture. In examining what she calls the "cultural fiction" of consanguinity, or shared blood, the author illuminates both its possibilities for soothing social and political divisions as well as its social and psychological costs. In one of the few books to trace the influence of writers of the Early Republic on antebellum sentimental works, Boudreau offers an array of examples from inside and outside the canon to illustrate that sentimental culture did not end with the Civil War.

Boudreau's canvas is uniquely broad and detailed; she looks for her evidence in the works of Thomas Jefferson as well as Benjamin Rush, Jürgen Habermas, and Adam Smith, in moral philosophy as well as captivity narratives, in slavery as well as freemasonry, and in mesmerism as well as phrenology. She also offers new insights based on lesser-known works, among them Howells's Annie Kilburn, Douglass's "The Heroic Slave," and writings of Henry James, Sr.

Kristin Boudreau is assistant professor of English at the University of Georgia.