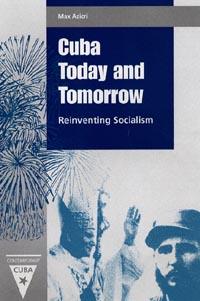 "A classic on post-Cold War Cuba. . . . Azicri evidences Cuba’s expanding external relations with the papacy, the Economic Union, and Latin America and argues that Cuba has begun internal changes that could later create an all-national rather than a solely communist party. . . . This work is essential reading for D.C., Havana, and Miami--and is likely to anger all three."--Choice

"A masterful and provocative summary, analysis, and evaluation of political, economic, and cultural developments in Cuba, as well as the international relations of Cuba, in the tumultuous decade following the collapse of the Soviet Union. In the process, Azicri gives a unique insight into how and why Cuban socialism, though greatly modified in the 1990s, continues to survive."--Sinan Koont, Dickinson College

Unlikely to gratify those with strong views on either side of the political divide, Azicri’s study provides an intelligent, scholarly response to the current questions posed by the Cuban Revolution.

Covering the turbulent period of the 1990s, the book examines such issues as the impact on Cuba of the Soviet Union's collapse, the country’s social malaise under economic scarcity, the reorganization of its economy, changes in its political system, problems in its relations with the United States, and the renaissance of Cuban religious life in the aftermath of the pope's visit.

Azicri offers an objectively researched study that addresses many of the assumptions made by partisan participants. Demonstrating how Cuba's ongoing reform process has allowed it to avoid the fate of other Soviet bloc regimes, he maintains that Havana has continually reinvented the nature of Cuban socialism. Drawing on original sources and scholarly studies from Cuba, the United States, and elsewhere, he argues that a more restrained and limited socialism is suitable to today's Cuba and explains why such a system probably will prevail beyond Castro.

Max Azicri, professor of political science at Edinboro University of Pennsylvania, is the author of Cuba: Politics, Economics and Society and of numerous articles on Cuban politics, society, culture, and international relations.

"A classic on post-Cold War Cuba. Essential reading for DC, Havana, and Miami -- and is likely to anger all three." -Choice
--Choice

"perhaps the definitive book thus far on Cuba since the dissolution of Soviet aid and trade. It offers a well-researched, well-balanced account of how the Castor regime has adapted to the new world order. The book covers the economy, polity, and religion in the new Cuba." - Journal of Politics
--Journal of Politics

"This is the book to turn to for information about the depth of the economic crisis into which Cuba was thrown after 1989; the dizzying series of economic reforms and their rationale and effects; the ins and outs of United States-Cuba relations; and the Cuban government's improving relationship with the Catholic Church and the details of the Pope's 1998 visit and its effects--in short, a chronicling of the events of the past 12 years in many different spheres."
--Peace & Change

"Well-written and thoroughly documented, it provides valid insights into the survival of the Cuban Revolution in the face of extreme adversity; the flexibility of the Cuban leadership in their ability to make the best of a horrendous situation; and the determination of the Cuban people to sustain their sovereignity and their independence."
--Science & Society

"Azicri offers a comprehensive view of the government's accommodation to changed international circumstances, economic and ideologic. For anyone interested in the policy choices of the past decades and their official justification (which at times entailed a reversal of positions that had been corrected previously) this is a must read."
--Latin American Research Review

"Azicri's work contains a massive amount of useful information on contemporary Cuba and nicely complements other recently published works on the island nation."
--The Americas