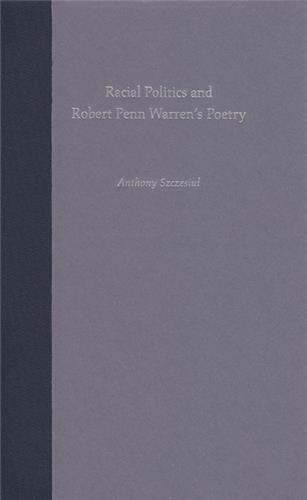 "An extremely insightful study of the relationship between Warren’s creative practice and his evolving attitudes on race."--Ernest Suarez, Catholic University of America

"Nobody before Szczesiul has been able to see how Warren's early views hang together with larger convictions about the nature and work of poetry, and how Warren's famous change of heart about segregation bore fruit also in a changed view of how poetry can sound, what subjects it can address, what relationship it has to the life and consciousness of the poet, and what kinds of relationships between truth and language are possible in poetry."--John D. Burt, Brandeis University

Robert Penn Warren, America's first Poet Laureate, three-time winner of the Pulitzer Prize, founder of the New Criticism, and one of the most prolific American poets of the twentieth century, wrote more about race than perhaps any other white literary figure of his generation. His was a crucial voice speaking to other white southerners fearful of the impact of integration on their way of life. Tracing connections between his changing views on racial politics and his varying poetic theories and themes, Anthony Szczesiul offers a new, revisionary reading of Warren's diverse and extensive canon of poetry.

Szczesiul delineates the political and ideological implications of Warren's evolving aesthetic, revealing that Warren's poetry was in an intensive and ongoing dialogue with its changing social and historical contexts. Politically, Warren made the dramatic transition from a segregationist to an integrationist position. Poetically, his career successfully bridges the modern and postmodern eras of 20th-century American poetry. Szczesiul demonstrates that Warren's work evolved not simply as a natural consequence of artistic maturity and development but through difficult negotiations with issues of self and identity, politics and aesthetics, individual will and social change, and race and cultural pluralism. He maintains that Warren's aesthetic conflicts become especially apparent when we consider his poetry alongside his racial politics.

Szczesiul is the first to thoroughly trace the ways in which Warren's changing thoughts on race influenced his aesthetic thinking, and vice versa. His frank approach to this inflammatory subject makes considerable use of unpublished archival materials, from which Warren emerges as an extremely complex figure with great contemporary relevance.

Anthony Szczesiul is assistant professor of English at the University of Massachusetts, Lowell.

" Not only a fine critical appreciation of Robert Penn Warren's poetry but also an important contribution to philosophical reflection on the interrelationship of aesthetics, ethics, and politics - and a timely reflection on racism, memory, and Southern cultural identity."
--JASAT

"An impressive amalgamation of critical modes--deft close readings, historically informed discussions, and applications of poststructural theory are all well represented in the study." "This book will be of use to scholars who are interested in re-reading Robert Penn Warren in new ways, and in new contexts, as befitting the revisions of modern studies begun over the past few years."
--Mississippi Quarterly

"Provides some of the most lucid and most useful criticism of Warren's poetry in any context." "One of the best critical treatments of Warren in recent years."
--Southern Literary Journal