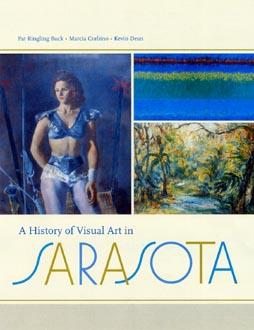 A History of Visual Art in Sarasota

"A much-needed telling of the unique art scene that is Sarasota, given a widened scope by being told from three different perspectives by three knowledgeable members of the art community."--Katherine L. Rowland, Sarasota

Sarasota's distinction today as a vibrant capital of culture springs from the calculated ambition of a handful of early residents--celebrities who spearheaded the city's destiny. Their vision and resources transformed a quaint fishing village on the Gulf coast of Florida into a glamorous resort town and international art center--a story told here, with full-color photographs, for the first time.

In this book, three well-known Sarasota residents trace the origins of the city's cultural identity to the arrival of circus impresario John Ringling, railroad executive Ralph Caples, and socialite Bertha Palmer, all of whom showcased impressive art collections in their homes. With establishment of the John and Mable Ringling Museum of Art and the Ringling School of Art, the city became known as a center of visual arts, and the cadre of professional artists who appreciated Sarasota's magnificent tropical light and landscape set up studios and stayed. Helen Sawyer and Jerry Farnsworth are acknowledged as the founders of the earliest art colony, which grew to include such artists as John Chamberlain and Richard Anuszkiewicz.

Art openings and beaux arts charity balls provided much of the town's early magic, and the flourishing creative community soon included illustrators, cartoonists, and writers such as Evan Hunter and John D. MacDonald. The Ringling Bros. and Barnum & Bailey Circus Winter Quarters attracted thousands of visitors, including Ernest Hemingway, Bette Davis, Cecil B. DeMille, and Prince Rainier. In the 1960s, Alfred Barr, former director of the Museum of Modern Art in New York, inspired the founding of a Fine Arts Institute at New College with Philip Guston, Larry Rivers, and Conrad Marca-Relli among the instructors.

A colorful canvas of historical background and biographical information, this history documents the way visual art influenced the growth of the city and continues to define the character of Sarasota today.

"A History of Visual Art in Sarasota is the long-awaited celebration of that history by Pat Ringling Buck, an arts writer, author, and historian; Marcia Corbino, an arts writer who's written for the Longboat Observer; and Kevin Dean, a visual artist and an instructor and gallery director at the Ringling School of Art and Design…'A History of Visual Art in Sarasota' is a book-lover's book. They say you shouldn't judge a book by its cover, but judging by its cover - crisp, colorful art by Helen Sawyer, Jerry Farnsworth and Julio de Diego - it's a good one. Inside it's equally good - nice typography on low-acid paper with stunning, well-registered, 4-color plates. Granted its subject matter, it's only fitting that the book be a work of art in its own right." - Longboat Observer
--Longboat Observer

"as much a social history of the city as it is a chronicle of its artistic heritage… a solid piece of scholarship that leaves the reader with a visceral sense of our city's cultural history and a feeling of optimism about the future." - HeraldTribune.com
--HeraldTribune.com

"an interesting and informative look at Sarasota's art involvement from the earliest beginnings to the present. It names names and offers biographies of artists whose work will undoubtedly become more valuable to the growing group of collectors, dealers, and institutions who rightly recognize the importance of contemporary Florida art and the richness of Florida's art tradition. It is a book for historians, scholars, and art lovers.
--Florida Historical Quarterly