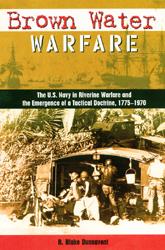 Brown Water Warfare:
The U.S. Navy in Riverine Warfare and the Emergence of a Tactical Doctrine, 1775–1970

"An original and significant contribution to the naval history of the United States. There is no comparable study that follows the thread of riverine warfare across two centuries of American history. Even more unusual, the author has focused on the development of an operational doctrine, a very significant and overlooked issue in naval affairs. His admirable simplicity and directness in style tend to obscure the fact that this is a work of enormous erudition in the field of American naval history."-- John B. Hattendorf, author of Naval History and Maritime Strategy

Throughout history, rivers have been vital arteries of transportation, commerce, and communication and, consequently, are key military areas in times of conflict or war. Brown Water Warfare is the first history of riverine warfare as conducted by the U.S. Navy.

R. Blake Dunnavent traces the evolution of riverine warfare in U.S. military operations from its informal inception in the 18th century to its establishment as a formal doctrine in the 20th century. As the key to understanding the emergence, development, and later adoption of this particular military strategy, he examines the conflicts in which riverine tactics figured prominently: the American Revolution, the War of 1812, the Second Seminole War, the Mexican War, the Civil War, the Rio Grande Patrol, the Philippine-American War/Yangtze River Patrol, and the Vietnam War.

Dunnavent provides descriptions of these campaigns and, subjecting them to analysis for the first time, demonstrates that lessons had to be learned anew in virtually every case. Only with the escalation of the conflict in Vietnam did naval leaders come to consider riverine forces an important component of their task force and begin to develop a formal doctrine. The collective lessons learned from two centuries of riverine operations spanning the globe, ultimately codified in doctrine, are the focus of this volume.

Materials from the National Archives, Navy Operational Archives, Marine Corps Archives, Library of Congress, and private collections serve as the basis for his investigation. Engravings, drawings, photographs, and detailed maps enable the reader to visualize the events described in each chapter. Relatively little else has been published with regard to the United States' role on inland waterways, domestic or international. For military historians as well as buffs, Brown Water Warfare fills a historical gap as the only complete study for those interested in U.S. riverine military history.

Little else has been published to document the important ways in which the United States has sought to secure domestic and international waterways. This book offers tremendous insight and looks at the future importance of riverine conflict."--Sea Power
--Sea Power

"Dunnavent is the first to bring together the major riverine tactics of the US Navy in one volume and to provide a series of case studies that focus on riverine doctrinal development - a significant addition to the historiographical record on the role of riverine warfare in American Naval history." "This book should be included in any library that deals with military history, specifically with American Naval history."
--International Journal of Maritime History

" A very extensively and carefully researched history of America's riverine and estuarine naval activity spanning nearly two centuries. The book benefits from the author's obviously great interest in and enthuasiam for the subject."
--Work Boat World