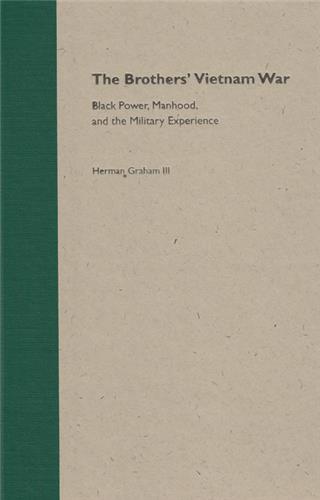 "Clearly focused on exploring the alternative notions of racial manhood which African American servicemen developed during the Black Power era, The Brothers' Vietnam War is a welcome addition to the surprisingly small body of scholarly literature on the black experience in Vietnam.... Herman Graham’s exemplary use of male bonding rituals, storytelling, handshakes, and hairstyles to examine both gender consciousness and the soldiers’ and sailors’ transformation to group militancy should serve as a model for future studies."--William L. Van Deburg, University of Wisconsin, Madison


"The best study of the black GI experience in Vietnam to date . . . fills a major gap in the histories of Vietnam and of African American men."--Craig Werner, University of Wisconsin, Madison, author of A Change Is Gonna Come: Music, Race and the Soul of America

The Brothers’ Vietnam War is the first study of the black soldier in the Vietnam conflict to focus on his search for manhood through the inherent power struggles in the military and the Black Power movement of the time. Herman Graham examines the black GI’s transformation to individual self-actualization and group militancy, which provides many fresh insights into the wellsprings and workings of black empowerment in the military.

Vietnam was the first war in American history in which integration was the official military policy from the inception of hostilities. The armed forces were appealing to many black men because of the promise of equal treatment, but they found the opposite to be true. In response, black GIs banded together and found their masculinity where the white military hierarchy could not reach; however, in combat situations African American men found that the importance of teamwork and trust crossed racial barriers and fostered interracial relationships.

Herman Graham draws upon participant interviews (including military officials), news media, memoirs, oral histories, and GI folklore to describe both the manly aspirations and the frustrations of black servicemen who felt emasculated by their subordinate status in the armed forces. Searching for manhood, young African American GIs defined their masculinity through racial solidarity stemming from the Black Power movement in the United States and through defiance of military authority. Graham describes their initiation rituals, storytelling, sex talk, cultural awareness groups, handshakes, hairstyles "emasculating" drug use, and older "Uncle Tom" officers. He offers a splendid analysis of the "symbolic crisis" in black manhood created by Muhammad Ali’s overt opposition to the war and provides original insights into particular incidents, most notably the Kitty Hawk events.

Herman Graham III is assistant professor of history at Denison University and has published in the Journal of Men’s Studies.

"an important contribution to our understanding of the Vietnam War and the social history of the U.S. military."
--The Journal of Military History

"A compelling piece that is hard to put down."
--Politics, Social Movements, and The State

"An outstanding addition to the history of not only the United States, but also of African Americans, the Vietnam War, and military history as well."
--The Southern Historian

"Well-researched, carefully documented, convincingly argued, and cogently written. It is a 'must read' for understanding the experience of American combat soldiers in Vietnam, as well as the influence of the black power movement during the Vietnam era."
--H-Net Reviews