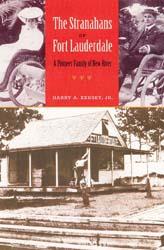 The Stranahans of Fort Lauderdale:
A Pioneer Family of New River

"This informative, fast-paced, interesting book on the Stranahans of Fort Lauderdale provides needed historical context to a dynamic, ever-growing population center. Harry Kersey, one of Florida's leading historians, interweaves the story of the town's founding and growth into the lives of two of its most significant pioneers and community builders."--J. Michael Denham, director, Center for Florida History, Florida Southern College, Lakeland
When they married in 1900, Frank and Ivy Stranahan began a life together on the Florida frontier that would shape and define the development of one of the state's most sophisticated urban centers. Pioneering spirit and economic enterprise linked them to Seminole Indians, venture capitalists, and colorful entrepreneurs along the New River settlement; today they're recognized as a founding family of Fort Lauderdale and their riverfront home has been restored and designated a National Historic Landmark.
Frank Stranahan came south from Ohio in 1893 to run an overnight camp on the stagecoach line carrying passengers from Lake Worth to the Miami area. He soon opened a trading post that thrived on commerce in pelts, plumes, and hides with Seminole Indians, who in turn purchased goods and groceries to take back to their camps in the Everglades. Stranahan's business interests expanded to include real estate and banking. An honest businessman, he became a respected political and civic leader, instrumental in the birth of Fort Lauderdale in 1911. When the Florida land boom collapsed and his bank closed, Stranahan's mental and physical health failed, and he committed suicide in 1929.
Ivy Cromartie, a native Floridian, was 18 when she arrived at the settlement as its first schoolteacher and met her future husband. Energetic and articulate, she focused her activities outside the home. Besides teaching, she was active in a variety of reform movements ranging from Audubon Society efforts to save the plume birds to temperance and women's suffrage, working mainly through the Florida Federation of Women's Clubs. She is best remembered for her role as an advocate for Indian rights--especially education and child welfare--primarily with the Friends of the Seminoles, an organization she established in the 1930s. Before her death in 1971 she spoke frequently about her full life to reporters and historians and was interviewed extensively by Kersey.
Harry A. Kersey, Jr., professor of history at Florida Atlantic University, Boca Raton, is the author of several books, including The Florida Seminoles and the New Deal, 1933-1942 (UPF, 1989) and Pelts, Plumes, and Hides: White Traders among the Seminole Indians, 1870-1930 and the coauthor of Buffalo Tiger: A Life in the Everglades.

"Thanks to Kersey's research, the real story behind the Stranahans of Fort Lauderdale will be available to all, unvarnished by the gloss of public relations spin doctors."--Delray Beach News
--Delray Beach News

"A reminder that South Florida's history is simultaneously very old and very new." "Balanced, modest, and well crafted, a story unique to its time and place but at the same time as familiar as one's own family history. Kersey navigates through memory, legend, and recorded history to produce a vivid portrait of South Florida's dynamic economic and cultural development, a process that continues to this day with even greater intensity."
--The Journal of Southern History