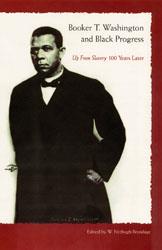 "This timely collection of sophisticated and engaging essays on Booker T. Washington's Up From Slavery broadens and contextualizes our understanding of both the man and his book."--John David Smith, North Carolina State University

Booker T. Washington's rise from slavery to the presidency of the Tuskegee Institute and an adviser to American presidents and tycoons is an extraordinary saga of talent, ambition, and accommodation. Inspired by the centenary of the publication of Washington's autobiography, Up From Slavery, this collection of essays reinterprets Washington's career and self-presentation.

As the most visible and widely acclaimed black leader of his era, Washington played a pivotal role in advocating a strategy for the racial uplift of African Americans in an age of intensifying racism and discrimination. Whether white or black, Washington's critics and supporters acknowledged his skill at extending his influence over all areas of American race relations. In recent decades, however, Washington's purported "accommodationist" program of racial uplift has been dismissed as uninspiring and even retrograde. Scholars seem to have concluded simultaneously that the riddle of Washington has been solved. This collection insists that in order to understand the era of Jim Crow, we must come to terms with Washington and his autobiography. It uses Washington, his autobiography, and his program to consider the meanings of Up From Slavery, the plight of African Americans, and possible responses by blacks in the United States and elsewhere to the "highest stage of white supremacy."

Collectively and individually, these essays shed light on aspects of Washington and his life that have been poorly understood. Several essays clarify the treacherous political and cultural context in which he operated, thereby revising conventional assumptions about his latitude for action. Other essays delve into previously ignored topics, including Washington's tactics of self-representation, his strategy for economic development, his invocations of Protestantism in a seemingly secular ideology of racial uplift, and his deft exploitation of his masculinity in an age when black masculinity was suspect.

Neither a critique nor an apologia, Booker T. Washington and Black Progress offers fresh perspectives by leading scholars on one of the most remarkable and influential figures in turn-of-the-century America, providing a new appreciation of both the man and his times.

CONTENTS
1. Reconsidering Booker T. Washington and Up From Slavery

2. Up From Slavery as History and Biography

3. In Search of Booker T. Washington: Up From Slavery, History, and Legend

4. Understanding the Wizard: Another Look at the Age of Booker T. Washington

5. What Made Booker Wash(ington)? The Wizard of Tuskegee in Economic Context

6. More Than an Artichoke: The Pragmatic Religion of Booker T. Washington

7. "Curious Silence"? African American Women in Up From Slavery

9. Moving Beyond the Accommodation/Resistance Divide: Race and Gender in the Discourse of
Booker T. Washington

W. Fitzhugh Brundage is William B. Umstead Professor of History at the University of North Carolina, Chapel Hill. His publications include Lynching in the New South and Where These Memories Grow.

"This new book may have readers rethinking, rediscovering, and retaining the ideology of one of our greatest leaders."
--Black Issues Book Review

"An outstanding book. Overall, Booker T. Washington and Black Progress should provoke vigorous discussion about Up from Slavery and its controversial author. This slender book could well help to complete the reinterpretation of Washington begun nearly fifty years ago by August Meier and continued in the work of Louis Harlan."
--The Journal of Southern History

"An outstanding book." "This slender book could well help to complete the reinterpretation of Washington begun nearly fifty years ago by August Meier and continued in the work of Louis Harlan."
--The Journal of Southern History

"A timely collection." "The essays are well written; all are interesting, and many are quite provocative."
--The Journal of American History