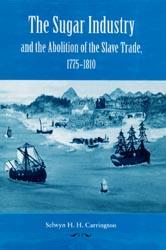 "Essential reading for anyone interested in the complex history of the abolition of the Caribbean slave systems. . . . Provides the most detailed examination of the political economy of sugar production in the British West Indies available today. There is no other work that even closely rivals the scope of this study."--Franklin W. Knight, Johns Hopkins University

Selwyn Carrington analyzes the complex state of the British West Indian economy at the end of the 18th century, crucial years for the Caribbean colonies and the slave trade. Drawing on a wealth of primary materials, from plantation records and estate day-books to correspondence among plantation owners, merchants, and overseers, his book presents a detailed portrait of an economic system in decline for 30 years prior to the British abolition of the slave trade.

Carrington explores planter flight, lack of investment in the older sugar islands, and failed attempts to rationalize sugar production and to reduce sugar imports to England. He marshals an abundance of statistical evidence to trace other factors in the shift from one slave system to another--such as trade relations, debt crises, hired labor, management techniques, and local and foreign sugar markets--and their impact on the slave trade, slavery, and the British West Indian economy. He concludes that with the arrival of what Eric Williams called "mature capitalism," the sugar colonies once at the core of the Atlantic economy became irrelevant to the new economic life, and their labor system, in the eyes of British policy makers and political commentators, became a millstone to be cast off.

Utilizing primary material and statistical data never before presented, Carrington provides a rich source for those interested in the Caribbean economy between the American Revolution and the Industrial Revolution. His study will also add a meticulous and insightful chapter to the history of the Atlantic slave trade and its demise.

"formidable contribution to the debates on African Atlantic slavery and its abolition." - Choice
--Choice

" A must-read for any scholar of Atlantic slavery or the colonial Atlantic economy."
--Louisiana History

"May well help to outline new plots and recast the dramatis personae for future studies of empire, slavery, and the political economies of the Atlantic world."
--American Historical Review

"Carrington has done the scholarly world a real service by bringing a neo-Marxist focus on the limits of "mature capitalism" to bear on abolitionism. He has provided a framework within which the next generation of researchers can probe the subtleties of the relationships among people and the changing financial worlds they inhabit, or between economic institutions such as slavery and the dynamics of jettisoning those institutions when they are no longer seen to serve a positive economic or social function."
--Enterprise and Society

"While Caribbean scholars no longer focus only on abolitionists to explain the end of the British transatlantic slave trade in 1807, these ideas still circulate widely in the general public and even surprisingly among numerous academics." "The ongoing persistence of these ideas indicates that Carrington is justified in arguing that the 'Williams Thesis' still has its place as a critique of British imperial historiography. As the latest advocate in the historical debate, The Sugar Industry and the Abolition of the Slave Trade, 1775-1810 deserves to be widely read.
--H-Net Reviews

"This is an important contribution to a distinguished historiography. Selwyn H. Carrington has served notice that even in our era of conservative retrenchment that Marxism still has much to offer the history of slavery and abolition."
--International Third World Studies Journal and Review

"Clearly a valuable contribution to Caribbean history, studies of New World slave systems, the transatlantic slave trade, and emancipation, as well as to the growing field of Atlantic history. It will be well appreciated by historians who specialize in the economic history of major slave societies of the Americas."
--HAHR