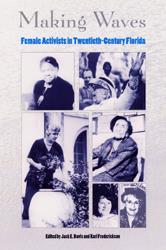 "These essays lift up the lives of outstanding Florida women who helped shape the course of 20th-century Florida."--James B. Crooks, University of North Florida

From Ruth Bryan Owen, Florida's first congresswoman, and Mary McLeod Bethune, founder of Bethune-Cookman College, to Betty Mae Tiger Jumper, the first chairwoman of the Seminole Tribe, and Marjory Stoneman Douglas, champion of the Everglades, Making Waves examines the lives and works of women activists who made a significant impact on Florida in the last century.

This collection enriches our understanding of the history of modern Florida and the role women played in it. To a degree greater than any other southern state in the 20th century, Florida experienced dramatic economic, political, social, and environmental challenges, and Florida's women were in the forefront of the great social and political responses to those challenges. These 13 essays describe the contributions made by women in urban renewal, civil liberties, civil rights, child welfare, labor unions, education, environmental protection, rural extension work, and women's liberation.

By illuminating the involvement of the state's women in many of these fundamental issues, Making Waves provides a long-overdue chapter in Florida history. It will also contribute to the advancement of the study of women's history by examining women's activism in a variety of contexts and illustrating how this activism was often circumscribed by class and racial bias.

"Specialists in Florida history will learn much from this volume about women's individual and collective actions in state politics, from the impact of individual female political leaders to the work of Florida women in such diverse fields as home demonstration work, environmentalism, the civil rights movement, and women's liberation."
--Florida Historical Quarterly

"an impressive collection" "Anyone interested in women's activisim and in women's leadership for social change would do well to consult this book."
--History of Education Quarterly