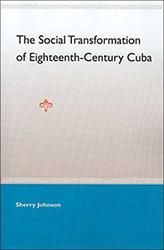 The Social Transformation of Eighteenth-Century Cuba

"No previous work so clearly and coherently examines the uniqueness of Cuba within the Caribbean and Hispanic American context. It is indispensable for understanding the development of society and economy in Cuba after 1762."--Franklin W. Knight, Leonard and Helen R. Stulman Professor of History, Johns Hopkins University


Sherry Johnson’s revisionist study contributes to a new understanding of colonial Cuban history in several ways. Most important, it challenges existing interpretations of Cuban history by advancing an alternative to the "sugar is forever” thesis. In doing so, Johnson provides answers to fundamental questions regarding Cuban identity in the 19th century.
Johnson advances a wealth of demographic data to document the contribution of the military, particularly military spending, to social, spatial, and economic change on the island long before sugar became the principal engine of its economy. She also shows how immigration had an impact on the elite and middling ranks, analyzes family life in the city, and explains how the consequences of reform resonated to the lowest ranks of Cuban society.
In addition, she establishes how the death of the Spanish monarch Charles III in 1788 brought a brutal purge of Cuban society and a new, detested captain-general to power in 1790. The political repercussions of this hated regime were felt well into the 19th century, she argues, in the genesis of a popular discourse against Spanish colonialism, sugar, and slavery.

"contributes to a new understanding of colonial Cuban history by providing answers to fundamental questions regarding Cuban identity in the 19th century. It documents the military contribution to Cuban economy, the effects of immigration on society, and the causes of discourse against Spanish colonialism." - Hispanic Outlook
--Hispanic Outlook

"this is a book of extraordinary importance, with abundant new and fresh interpretations of late eighteenth century Cuban history and offers several clues for further research… Without any doubt Johnson's work is a landmark in studies of Colonial Cuba, both for the relevance of the information that it provides and for the high quality of her interpretation and analysis of this important historic moment." - Caribbean Studies
--Caribbean Studies

"Every now and then a monograph emerges that requires readers to rethink long-accepted historical interpretations. Johnson's work on Cuba is one of these." - Choice
--Choice

"Researched in the appropriate archives of Spain and Cuba and in various repositories in the United States, her book contains a wealth of new information about colonial Cuba during a period when the island experienced sweeping transformations following the defeat at Havana in the Seven Years' War." - Hispanic American Historical Review
--Hispanic American Historical Review

" Johnson has pointed out in sophisticated detail the effects of military reforms in helping to shape Cuban society in the late 18th century, and this is a very valuable addition to Cuban Historiography."
--Journal of Social History

"Will have an important and long-lasting contribution to the historiography because it reminds scholars that there was much more to colonial Cuba than sugar, slavery, and opposition to Spanish rule."
--Latin American Research Review

"Johnson does a remarkable job of mixing social, military, and economic histories into a seamless narrative that, while rich in detail, captivates the reader's attention."
--Florida Historical Quarterly

"The Social Transformation of Eighteenth-Century Cuba does more than just warn against the monocultural myopia of sugar and slavery; it also repositions Cuba within the broader context of Latin American colonial relations." "By employing the methods of microhistory, Johnson reconstructs the diverse and complex lives of everyday colonial Cubans and in redressing the dominance of elite perspectives she also enriches our understanding of Cuba's colonial past by releasing it from the grasp of sugar and slavery."
--International Third World Studies Journal and Review

"Offers an interesting and important revision of our views of Cuba at a critical moment in its history." "It will be essential reading for anybody interested in this vital conjuncture in Cuban history, while also offering rich comparisons for those interested in late colonial Spanish America and the history of its transition to independence."
--Journal of Latin American Studies

"The wealth of archival evidence and the interpretive synthesis she offers in this book will be an essential point of departure for all subsequent work on the subject."
--New West Indian Guide