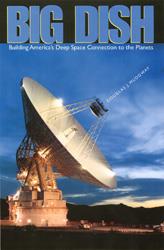 "Many space history books concentrate on the hardware actually launched into space. Few books look at the ground systems needed to successfully operate the spacecraft and receive scientific data. Douglas J. Mudgway's Big Dish is one of those few, looking at the huge, sophisticated mechanical and electronic marvels used to control planetary spacecraft and receive imagery and other data transmitted from hundreds of millions of miles away. The amazing increase in our knowledge of the solar system was made possible not just by rockets and satellites, but also by the 'big dishes' of the Deep Space Network."--David J. Whalen, ARTEL

The astonishing success of the United States' quest to explore space depends upon NASA's visionary Deep Space Network (DSN), a communications grid that provides the backbone of antennas and satellite links that track and control spacecraft launched from Earth. Douglas J. Mudgway participated in development and operation of the DSN from its infancy in the 1960s to its maturity in the 1990s, and he brings his practical experience to this story of the challenges, successes, and frequent failures that beset the dedicated engineers who turned the initial vision into reality.

Set against the Cold War race for technical supremacy in space, this well-illustrated book offers an unprecedented inside view of the antennas that have been indispensable in missions to the farthest reaches of our solar system. These gigantic instruments--about one acre in surface area and weighing over 6 million pounds--are among the largest of their kind ever constructed. Located at remote sites in California, Spain, and Australia, they have provided an international community of scientists with a deep space connection to the planets that has enabled unmanned spacecraft to return a wealth of data to Earth. Radio astronomers, too, have engaged these instruments to probe the mysteries of the cosmos.

Big Dish describes how these exquisite instruments work, how they came into being, and the problems encountered in their construction and in enhancing their performance over time to meet the demands of ever more ambitious planetary missions. It discusses the complexities of deep space communications in accessible language and introduces readers to the human story of perseverance and ingenuity that has maintained these great antennas for more than forty years. This is also a behind-the-scenes look at NASA's Jet Propulsion Laboratory in California, where political challenges, personal intrigue, and feats of brilliant engineering all contributed to the United States' preeminence in deep space exploration.

Douglas J. Mudgway is an independent consultant for NASA on the history of deep space planetary communications. After thirty years active service at the NASA Jet Propulsion Laboratory in California, he retired in 1991 and received the NASA Exceptional Achievement medal. He is author of Uplink-Downlink: A History of the Deep Space Network, 1957-1997.

"Set against the Cold War race for technical supremacy in space, this well-illustrated book offers an unprecedented inside view of the antennas that have been indispensable in missions to the farthest reaches of our solar system . . . Introduces readers to the human story of perseverance and ingenuity that has maintained these great antennas for more than forty years . . . A behind-the-scenes look . . ."
--www.astrosociety.org

"A compelling account of the crucial role that the Deep Space Network has played in some of NASA's most successful robotic missions to the outer solar system. The book is written for nonexperts and will appeal to a wide range of space enthusiasts, engineers, and scientists." "Highly recommended."
--Choice

"A great history of the ground based section of the exploration of space."
--Spaceflight: The Magazine of Astronautics and Outer Space

"In Big Dish, Mudgway addresses descriptive-resistant networking innovations, the engineering strategies for sending signals to even more distant space probes and receiving their even more faint signals. His story is about the building of the giant antennas and about their brilliant builders. The general reader, the specialist, and the historian are all well served."
--Technology and Culture