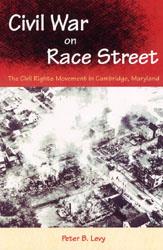 "An important contribution to the historiography of the modern African-American freedom struggle. By focusing on a campaign located outside the Deep South (led principally by an African-American woman) that attracted an unprecedented level of federal investigation, Levy joins those scholars who are profitably extending our understanding of what the freedom struggle was, how it was organized, and even when and where it was to be found."--Brian Ward, University of Florida

"Peter Levy's Civil War on Race Street joins a short list of first-rate works . . . that analyze the precise dynamics of protest and resistance during the civil rights era, getting past the sweeping narratives of change coming down from Washington to examine what, when, and how individuals actually built the movement on the ground."--Doug Rossinow, Metropolitan State University

Civil War on Race Street, so named because Race Street was the road that divided blacks and whites in Cambridge, Maryland, is a detailed examination of one of the most vibrant locally based struggles for racial equality during the 1960s. Beginning with an overview of Cambridge, particularly its history of racial and class relations, Peter Levy traces the emergence of the modern civil rights movement in this city on Maryland's Eastern Shore.

Catalyzed by the arrival of freedom riders in 1962, the movement in Cambridge expanded in 1963 and 1964 under the leadership of Gloria Richardson, one of the most prominent (and one of the few female) civil rights leaders in the nation. In the years after her departure from Cambridge, the movement went into decline until 1967, when it underwent a brief revival that culminated with a riot allegedly incited by black power spokesman H. Rap Brown. In the wake of the riot, blacks and whites in Cambridge sought to rebuild their city and return to a politics of moderation. However, Spiro Agnew, then governor of Maryland, used the riot to advance his political career and the fortunes of the New Right, thereby garnering the attention of the public (as well as Richard Nixon) and achieving the vice-presidency in 1968. At the same time, H. Rap Brown saw his influence and that of the civil rights movement decline.

In addition to providing valuable insights into Richardson and Agnew, this study is one of the few to examine a community in a "border" state. Levy demonstrates that the goals of the movement were not universal, that strategies underwent constant political and social change, and that the impact on the micro level was not as clean and immediate as historians would have us believe.

Peter B. Levy is associate professor of history at York College of Pennsylvania.

" An outstanding study of one of the most hotly contested cities during the civil rights struggle of the 1960s."
--Choice

"An outstanding study of one of the most hotly contested cities during the civil rights struggle of the 1960s."
--Choice

"It is easier to describe what brought Cambridge into the early civil rights phase of the conflict that it is to explain how it veered into Black Power violence." "How the objectives, strategy, and dynamics of this miniature reflection of the changing national racial crises unfolded is the major revelation of this excellent book." "A place that one freedom ride called a 'little Georgia' in the early 1960s became a mini-Detroit or Watts in 1967. To understand how this important transformation happened, readers of this review should turn to Levy's thoroughly researched and well-written book."
--The Journal of Southern History

"A concise and fascinating account of a local movement that triumphed by rejecting the creed of nonviolence, adding to the growing list of local campaigns that make fiction of the nonviolent King-as-martyr interpretation."
--American Historical Review

The Seedtime, the Work, and the Harvest: New Perspectives on the Black Freedom Struggle in America