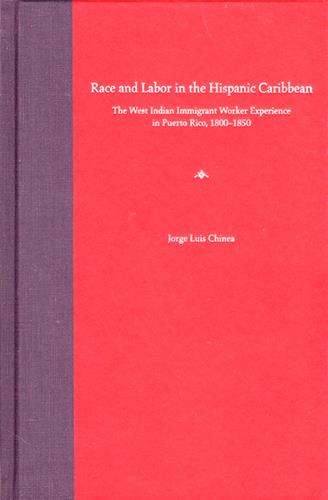 Race and Labor in the Hispanic Caribbean:
The West Indian Immigrant Worker Experience in Puerto Rico, 1800-1850

"By focusing this detailed, solidly documented study on Caribbean immigration to nineteenth-century Puerto Rico, Jorge Chinea achieves some noteworthy goals: he amplifies our understanding of Puerto Rico's colonial history, he contributes to our awareness of the Caribbean face of the African Diaspora, and he raises new questions about race and society in Puerto Rico. This work must be taken into account by all students of Latin American and Caribbean history and of the process of migration in general."--Vincent Peloso, Howard University "More than an outstanding—and much needed—monograph on the race-based history of foreign immigration to 19th-century Puerto Rico, the narrative skillfully weaves native American conscription and black slavery into its foci on European, Euro-Antillean, and Afro-Antillean newcomers. Thus, Chinea's work is a masterful synthesis of the island’s sociopolitical history for nearly the whole of the Spanish colonial period."--Joseph C. Dorsey, Purdue University

Chinea examines the social, economic, and political impact of foreign immigrants in Puerto Rico during its transition from subsistence farming and ranching in the late 18th century to commercial agriculture during the first half of the 19th century. He provides an island-wide assessment of how the capital, labor, and specialized skills of European and West Indian immigrants enabled Puerto Rico to become a major global exporter of tropical staples, particularly sugar and coffee, during this period.

Drawing upon a wide range of public safety, military, naval, passport, consular, and municipal archival sources in Puerto Rico and Spain, Chinea shows that fully one-third of all immigrants to Puerto Rico between 1800 and 1850 originated in the non-Hispanic Caribbean, and he explores the social and working experiences of West Indian immigrants. Without ignoring the cultural and economic contributions of West Indians, Chinea probes the relationship among racial politics, the rise of plantation enclaves organized around servile labor and oriented to international markets, and the spread of abolitionist and pro-independence struggles that threatened Iberian colonial hegemony in the Hispanic Caribbean. Readers interested in Latin American, Caribbean, and African diaspora studies, as well as ethnic, subaltern, and labor studies, will find valuable new insights in Chinea's work.

Jorge Luis Chinea is associate professor of history and director of the Center of Chicano-Boricua Studies at Wayne State University.

"Chinea's work enriches our understanding of the West Indian dimension of Puerto Rican immigration history. History students should use this work as an example of how to reconstruct and account for unofficial events, such as illegal immigration. Moreover, the book will fuel future arguments and scholarly research on the origins and development of Puerto Rican identity."
--The American Historical Review

"Provides and island-wide assessment of how the capital, labor, and specialized skills of European and West Indian immigrants enabled Puerto Rico to become a major global exporter of tropical staples, particularly sugar and coffee, during this period."
--New York Latino Research Clearinghouse

What makes Chinea's book stand out is his ability to strike a balance between quantitative and qualitative history--never losing sight of the humanity of legal and illegal immigrants in their quest for better economic opportunities. Chinea has crafted a much-needed work that enhances our understanding of the history of non-Hispanic, in particular West Indian, immigration to Puerto Rice and the contribution these overlooked segments of the population made to the rise of commercial agriculture on the island.
--The Americas

…Chinea has provided a refreshing depiction of the West Indian contribution to Puerto Rican society based on impressive and extensive archival research.
--New West Indian Guide