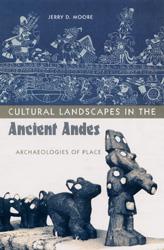 Cultural Landscapes in the Ancient Andes:
Archaeologies of Place

"Archaeology at its best. . . . Archaeology as anthropology, written by an archaeologist who has a master ethnographic eye, the rigor of a scientist, and the breath and soul of a humanist. Moore returns archaeology to its primary task: to reconstruct rather than recontextualize or appropriate the many dimensions of the past."--Helaine Silverman, University of Illinois, Urbana-Champaign

"Once again, Jerry Moore brings a unique perspective to the world of Andean archaeology. His examination of architecture will cause scholars to rethink many of their basic assumptions about ancient Andean societies."--Thomas Pozorski, University of Texas-Pan American, Edinburg

The ancient civilizations of the South American Andes created some of the most spectacular monuments and buildings in the Western Hemispere, and these edifices had a wide range of impacts on the cultures they served. Jerry Moore examines archaeological and ethnohistorical data with an innovative lens and discovers what the architecture of the Moche, Chimu, and Inca reveals about the roles of authority, conflict, and ritual in the cultural identities of these societies.

Arguing that the culturally constructed environment is always the expression of multiple decision domains, Moore outlines a series of domains linking architecture and human experience. He then provides an analysis of sound and space and an examination of ceremonial architecture and the nature of religious authority, and he explores the design logics and technologies of displays in ritual processions. He also discusses "house societies" as conceived by Levi-Strauss and argues for the emergence of house societies on the north coast of Peru after 800 CE. Throughout, Moore emphasizes the diverse and recursive relationship between people and place, underscoring the necessity for archaeology that is sensitive to the ancient experience of place.

"In each of these essays Moore has captured the essence of ancient (and modern) architecture in terms of different aspects of human experience: sound, authority, movement, and memory. To emphasize the point I began with, this is a book about architecture and its interpretation first, a book about the Andes second. It deserves a place on the bookcase of any archaeologist with an interest in ancient archhiteture, from hunter-gatherer villages to the great palaces of later states."
--Journal of Anthropological Research

…deserves to be read by a wide readership of Americanists and those interested in other parts of the world.
--Journal of Latin American Studies