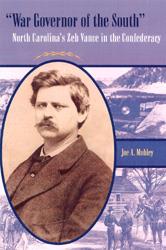 "War Governor of the South":
North Carolina's Zeb Vance in the Confederacy

“This thoughtful, deeply researched book definitively demonstrates that Zeb Vance was committed to southern independence and protection of civil liberties. His disagreements with the Davis administration allowed him to placate the dissidents in North Carolina while reflecting his main concern about the accretion of power by the Confederate government.”—Max R. Williams, professor emeritus of history, Western Carolina University

Zebulon B. Vance, governor of North Carolina during the devastating years of the Civil War, has long sparked controversy and spirited political comment among scholars. He has been portrayed as a loyal Confederate, viciously characterized as one of the principal causes of the Confederate defeat, and called “the Lincoln of the South.”

Joe A. Mobley clarifies the nature of Vance’s leadership, focusing on the young governor’s commitment to Southern independence, military and administrative decisions, and personality clashes with President Jefferson Davis.

As a confirmed Unionist before the outbreak of the war, Vance endorsed secession reluctantly. Elected governor in 1862, Vance managed to hold together the state, which was divided over support for the war and for a central government in Richmond. Mobley reveals him as a man conflicted by his prewar Unionist beliefs and the necessity to lead the North Carolina war effort while contending with widespread fears created by Lincoln’s Emancipation Proclamation and such issues as the role of women in the war, lawlessness and desertion among the troops, the importance of the state’s blockade-runners, and the arrival of Sherman’s troops. While the governor’s temperament and sensitivity to any perceived slight to him or his state made negotiations between Raleigh and Richmond difficult, Mobley shows that in the end Vance fully supported the attempt to achieve southern independence.

Joe A. Mobley is editor of the Letter Press Documentary Series "The Papers of Zebulon Baird Vance," former editor-in-chief of the North Carolina Historical Review, and the author of a number of books for the North Carolina Office of Archives and History.

"An interesting examination of one of the Confederacy's most intriguing politicians."
--The Post and Courier (Charleston, SC)

"Most complete study of Zebulon B. Vance's two terms as governor during the Civil War that we have at this point… 'War Governor of the South' will remain the standard study of this topic for the foreseeable future."
--The North Carolina Historical Review

"Distinguished by the qualities that make a book worthy of contribution to literatuer and should find a place on the reading lists of those interested in the Civil War, the role one state played in the Southern war effort, and the reasons for Confederate defeat."
--The Civil War News

"will be of great interest to students of the Tar Heel state and the Civil War."
--journal of American History