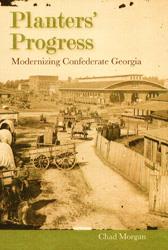 "Chad Morgan presents a well-researched and perceptive analysis disproving the idea that wealthy southern planters, as a class, opposed the modernization and industrialization of the South. . . . An in-depth overview of the incentives and difficulties encountered by one particular state attempting to industrialize during the Civil War."--Karen R. Utz, curator, Sloss Furnaces National Historic Landmark

Planters' Progress is the first book to examine the profoundly transformative industrialization of a southern state during the Civil War. More than any other Confederate state, Georgia mixed economic modernization with a large and concentrated slave population. In this pathbreaking study, Chad Morgan shows that Georgia's remarkable industrial metamorphosis had been a long-sought goal of the state's planter elite.

Georgia's industrialization, underwritten by the Confederate government, changed southern life fundamentally. A constellation of state-owned factories in Atlanta, Augusta, Columbus, and Macon made up a sizeable munitions and supply complex that kept Confederate armies in the fields for four years against the preeminent industrial power of the North. Moreover, the government in Richmond provided numerous official goads and incentives to non-government manufacturers, setting off a boom in private industry. Georgia cities grew and the state government expanded its function to include welfare programs for those displaced and impoverished by the war.

Georgia planters had always desired a level of modernization consistent with their ascendancy as the ruling slaveowner class. Morgan shows that far from being an unwanted consequence of the Civil War, the modernization of Confederate Georgia was an elaboration and acceleration of existing tendencies, and he confutes long and deeply held ideas about the nature of the Old South. Planters' Progress is a compelling reconsideration not only of Confederate industrialization but also of the Confederate experience as a whole.

Chad Morgan is a Triangle Research Libraries Network Fellow at North Carolina State University. He has published articles in Civil War History and the Georgia Historical Quarterly as well as contributing to The New Georgia Encyclopedia and the African-American History Reference Series.

"Morgan makes good use of the evidence and has produced a gracefully written and intelligent work. It will be valuable for upper division undergraduate and graduate students as well as specialists in antebellum Georgia, the Civil War, Southern industrialization and Southern intellectual history."
--H-net.org South

"A masterful handling of a variety of primary sources and . . . a keen understanding of published scholarship . . . Morgan's well-crafted portrait of Confederate Georgia's industrialization provides a fresh perspective on the Civil War's long-familiar story."
--Register of the Kentucky Historical Society

"An instructive case study of a state's economic transformation during wartime conditions...a model of efficient and effective prose backed by evidence...recommended reading for economic and political historians grappling with the complex nature of southern industrialization during the turbulent decades of the mid-nineteenth century."
--EH.NET

…revisits and revises the Marxist school of historiography within the context of Civil War Georgia.
--North Carolina Historical Review

Morgan has written a fine work that should be read by anyone interested in the Civil War's economic impact upon the South.
--Journal of Southern History

…Morgan examines the efforts to promote and to foster industrialization in Georgia during the Civil War as a window onto the larger question of wealthy planters' attitudes toward modernity and progress.
--Louisiana History

…an important contribution to our understanding of the transformation of Georgia's urban home front during the Civil War.
--American Historical Review

…an intriguing blend of economic and intellectual history set before the compelling backdrop of a society hurtling toward secession, war, and defeat.
--H-Net

"The substance of this short book is persuasive."
--Enterprise & Society

"Represents a sterling addition to the University Press of Florida's New Perspectives on the History of the South series; it deserves a place among the book of any serious student of the Civil War".
--Civil War History