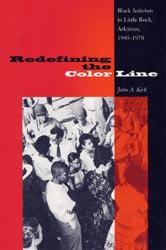 "The author has redefined the well-known story of the Little Rock crisis as a product of long-term developments among black citizens in Arkansas. Among other things, Kirk shows that many black persons in Little Rock and elsewhere in the state were active historical agents, long before the mass media, federal government, or textbook writers took notice of them."--David Chappell, University of Arkansas

"Kirk’s book delivers on what it claims to provide--a heretofore missing perspective of the black community in Little Rock and, to an extent, in [all of] Arkansas on the school integration crisis of 1957-58. In addition, his emphasis on the origins of this civil rights struggle in the 1940s and on the NAACP as a spearhead of that struggle is most welcome too."--Richard King, University of Nottingham

One of the most significant events in the struggle for black civil rights in America was the integration in 1957 of Central High School in Little Rock, Arkansas. In 1954, the U.S. Supreme Court ruled in Brown v. Board of Education that segregation was unconstitutional. The South's campaign of massive resistance against this ruling culminated in a showdown at Little Rock's Central High School, where President Dwight Eisenhower sent federal troops to protect nine black students as they entered the school. Although numerous studies have analyzed the Little Rock school crisis from a variety of perspectives, one striking omission in existing accounts is the role played by local black activists who were at the very center of events. This is the first book to contextualize the events in Little Rock within the unfolding struggle for black rights at local, state, regional, and national levels between 1940 and 1970.

Early civil-rights scholarship focused almost exclusively on the role played by national civil rights organizations between 1955 and 1965. John Kirk argues that only by understanding the groundwork laid by black activists at the grassroots level in the 1940s and 1950s can we fully understand the significance of later protests. Moreover, Kirk shows that local-level black activists and black organizations were not homogeneous, but differed significantly in their goals and strategies, thereby adding a multi-dimensional facet to a complex struggle that was more than just white against black.

Drawing upon oral history interviews and new material garnered from activists' privately-owned collections, as well as extensive documentation from local, state, regional, and national public archives, Redefining the Color Line charts new territory in the study of the Little Rock school crisis and forces a reevaluation of that familiar event and its place in the history of the civil rights struggle.

John A. Kirk is a lecturer in history at Royal Holloway, University of London.

"fine work by a solid scholar…Kirk's work fills a void in the historical literature of the civil rights movement on several levels. This book not only adds to the already voluminous studies of the Little Rock school crisis, but does so from the very different perspective of the local black community. Moreover, by expanding the time period generally studied by historians of the civil rights movement to include the 1940s, Kirk has deepened our understanding of the later period. In fact Kirk's work should lead to a reassessment by historians of the Little Rock school crisis." - H Net
--H-Florida

"an illuminating, well-researched book that focuses on local struggle, but in so doing tells readers much about the overall dynamics of the Civil Rights Movement." - Choice
--Choice

" John Kirk has provided an important and much needed study of grassroots political activity in Arkansas after 1940. His work demonstrates the importance of understanding the African-American freedom struggle as an ongoing process, not simply something that emerged in the 1950s."
--Arkansas Historical Quaterly

" Kirk succeeds in unearthing the daily struggle among Little Rock's African American attorneys, journalists, and other professionals to challenge segregation."
--The Journal of American History

" It surely says something about the condition of American race relations that only now, nearly a half-century later, has a scholarly monograph appeared whose primary focus is the participation of Little Rock's black community in developments before, during, and after the Central High crisis. John A. Kirk's exemplary new book thus fills a major lacuna in the historical record."
--Journal of Southern History