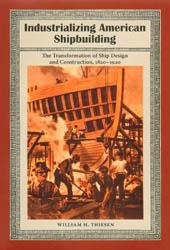 Industrializing American Shipbuilding:
The Transformation of Ship Design and Construction, 1820–1920

"A useful blend of the technical and social history of a truly resourceful industry. . . . Thiesen's extensive research illustrates the nature of innovation and the degree of cross-Atlantic technological exchange from the early 19th to early 20th centuries."--Nathan Richards, East Carolina University

Throughout the 19th century, the shipbuilding industry in America was both art and craft, one based on tradition, instinct, hand tools, and handmade ship models. Even as mechanization was introduced, the trade supported a system of apprenticeship, master builders, and family dynasties, and aesthetics remained the basis for design. Spanning the transition from wood to iron shipbuilding in America, Thiesen's history tells how practical and nontheoretical methods of shipbuilding began to be discarded by the 1880s in favor of technical and scientific methods. Perceiving that British warships were superior to its own, the United States Navy set out to adopt British design principles and methods. American shipbuilders wanted only to build better warships, but embracing British practices exposed them to new methods and technologies that aided in the transformation of American shipbuilding into an engineering-based industry.

American shipbuilders soon improvised ways to turn U.S. shipyards into state-of-the-art facilities and, by the early 20th century, they forged ahead of the British in construction and production methods. The history of shipbuilding in America is a story of culture dictating technology. Thiesen describes the trans-Atlantic exchange of technical information that took place during this era and the role of the U.S. Navy in that transfer. He also profiles the lives of individual shipbuilders. Their stories will inspire enthusiasts of ships, shipbuilding, and shipbuilding technology, as well as historians and students of maritime history and the history of technology.

William H. Thiesen, historian for the United States Coast Guard, and formerly curator and director of operations of the Wisconsin Maritime Museum in Manitowoc, Wisconsin, has published articles in Mariner’s Mirror, American Neptune, and International Journal of Maritime History.

"An important addition to the history of technology and maritime studies, and a good read for those interested in technology, tools, and engineering. Well written and argued, usefully illustrated, and attractively produced as a part of the University Press of Florida's 'New Perspectives on Maritime History and Underwater Archaeology' series, this work is an important contribution to the understanding of our maritime past."
--H-Net.org Maritime

"Dr. Thiesen, curator of the Wisconsin Maritime Museum, demonstrates a mastery of the primary and secondary sources in his field, and places his subject in the broader context of American industrial, cultural and economic development. His book will be required reading for maritime, industrial, and scientific historians."
--History: Reviews of New Books

…an ambitious and detailed examination of the development of American ship design and construction during the nineteenth and early twentieth centuries.
--Journal of Military History

…a wonderful study of crisscrossing trajectories in American and British ship design and construction.
--Journal of American History

Thiesen comprehensively describes the gradual abandonment of an ingrained hands-on approach to shipbuilding in America's private shipyards for a British-inspired, US Navy-implemented, appreciation for the values of scientific and theoretical engineering.
--International Journal of Maritime History

Industrializing American Ship Building documents the gradual emergence and grudging acceptance of theory, new materials, and methods in the design and construction of ships in the United States during the nineteenth and early twentieth centuries.
--Sea History

…an engaging social and technological history of shipbuilding that spans the century from 1820 to the second decade of the 20th century. …a necessary bridge between two well-known periods in nautical history, the early-19th century Golden Age of wooden ship construction and the fully industrialized shipbuilding that floureshed during World War I.
--Institute of Nautical Archaeology Quarterly

…truly recasts our understanding of an important historical subject.
--Techonology and Culture

…a valuable and original contribution.
--The Northern Mariner

" There is much that the current generation of shipbuilders, both in America and elsewhere, can learn from this well analysed, well-written and revealing history."
--Work Boat World

"A most worthwhile book by an author who is clearly a master of his important subject, a subject that has lacked such a clear and comprehensive treatment hitherto. It is to be recommended not only to maritime historians but also to anyone with a general interest in the history of engineering."
--Mariner's Mirror

"Modern shipbuilders, indeed all industrialists, could learn a lot from this excellent book."
--Baird Maritime