"A fresh contribution towards understanding the 35-year transition from Victorian to Modernist fiction, Richardson's sharp comparison between New Woman novels and tales of colonial adventure upends the gendered stereotypes about 'realism' and 'romance' and reveals a surprising interchange on late 19th-century public issues."--Sally Mitchell, Temple University

"Revises our views both of New Woman and colonial adventure fiction. . . . Richardson herself might be said to ‘occupy new terrain’ in service to progressive ends."--Linda K. Hughes, Texas Christian University

Cultural concerns about gender and empire converge in striking and unexpected ways in two popular novel forms of late-Victorian Great Britain. In the 1880s and 1890s, feminist New Woman fiction and colonial adventure stories competed for the sympathies of their readers. While one form questions a system that proclaims male superiority and the right to dominate others, the second celebrates British male victories over "savage" landscapes, animals, and people.

Despite their differences, the author argues, one subgenre is the twin star of the other: Each revolves around the other, affected by the other's gravitational pull as well as by the influence of larger ideological constellations. In each subgenre, shifting gender boundaries are at stake and sexual desire often drives the narrative engine of the novels. The two subgenres intersect on topics of pressing cultural debates--Irish Home Rule, women's suffrage, the expanding empire, and a growing human rights movement--and in a number of ways, such as their use of similar metaphors and modes of narration. While empire builders speak of enlarging their territory and creating a wider sphere of action, New Women use the same metaphors for their excursions out of the domestic realm.

Richardson shows that both subgenres often present themselves as hybrid forms. Indeed, she asserts, it is telling that Olive Schreiner's The Story of an African Farm--written in 1883 and considered the first New Woman novel--is set in an Africa more familiar to imperial adventurers than to nascent feminists. Her discussion includes She and King Solomon's Mines, both by the master of the colonial adventure genre, H. Rider Haggard, as well as Mona Caird's The Daughters of Danaus, Flora Annie Steel's On the Face of the Waters, Rudyard Kipling's Kim, and Joseph Conrad's Heart of Darkness. Examining the mutual development of two novel forms that evolved in response to each other, this book will be welcomed by scholars of 19th- and 20th-century literature and popular culture, as well as feminist, women's, gender, cultural, and post-colonial studies.

"Richardson delivers perceptive readings of the intertextual relations among many novels and exposes deep ideological connections amid their differences."
--Nineteenth Century Gender Studies

…her interpretative ability is impressive, and her perspectives are original and thought-provoking.
--Times Literary Supplement

…a welcome addition to our knowledge of the complex relation between the late-Victorian cultural debate on gender, race and empire, and two popular fictional genres of the fin de siécle…offer[s] new and refreshing perspectives…
--English Literature in Transition, 1880-1920

…provides intriguing ways of seeing, with its illuminating treatment of two consequential subgenres of the late Victorian period.
--Victorian Studies

"Her interpretative ability is impressive, and her perspectives are original and thought provoking. Richardson means to establish new readings of individual texts and stake a claim to new critical territory."
--Times Online

" Pushes beyond existing canonical boundaries. A lively, convincingly argued book in which the shared tropes and ideological concerns of colonial adventure fiction are vividly brought to the fore. Makes a really substantial and lasting contribution."
--Tulsa Studies in Woman's Literature 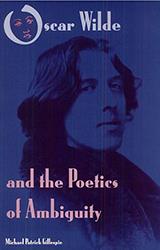 Oscar Wilde and the Poetics of Ambiguity