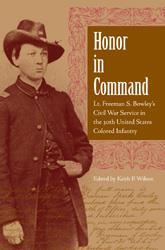 "Makes an important contribution to the growing body of scholarship on the racial legacy of the Civil War."--Joseph P. Reidy, Howard University

This memoir by Freeman Sparks Bowley, a young white officer who served as a lieutenant in a regiment of U.S. Colored Troops in the Union Army, is the work of a superb storyteller who describes how his Civil War experiences transformed him from a callow youth into an honorable man. Describing in detail his relationship with the men in his company, Bowley extols the role of black soldiers and their officers in the Union victory.

Bowley's service in the Union Army began when his regiment joined Grant's 1864 Overland Campaign. His courage was tested at the battles of the Wilderness and the Crater. Captured at the Crater, Bowley spent seven months in prison in Columbia, South Carolina. Paroled in March 1865, he rejoined his regiment to serve in the army of the occupation in the coastal regions of North Carolina and was mustered out of military service in December 1865. His memoir is an invaluable record of the fighting capabilities of black soldiers during the Battle of the Crater and the strategies they employed to cope with racism and adapt to military life. It is also a detailed account of the social dynamics of prison life.

Keith P. Wilson is a lecturer of history and deputy head of the School of Humanities, Communications and Social Sciences at Monash University in Australia.

" Is an invaluable addition to Civil War studies."
--H-Net Reviews

"A worthy contribution to the literature on the wartime experience of African American soldiers."
--Louisiana History