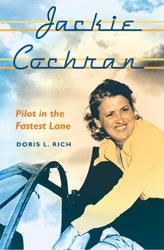 "Cochran's close friend Amelia Earhart is, of course, the first name mentioned when the subject of women pilots arises. But as readers of this book will see, it is Cochran whose name should be on people's lips when a discussion of women pilots is taking place."--Claudia M. Oakes, Chief Operating Officer, Cradle of Aviation Museum

"This biography of Jackie Cochran is pathbreaking. Jackie Cochran was a dominant figure in mid-20th century American aviation but her life story has received little critical examination by biographers and historians. No more. No one will write about Cochran in quite the same way again as Rich has filled each chapter with new information and insight."--Deborah G. Douglas, Curator of Science and Technology at the Massachusetts Institute of Technology Museum

Born in 1906 in Muskogee, Florida, Jacqueline "Jackie" Cochran was America's greatest woman pilot: the first to break the sound barrier, first to fly a bomber across the Atlantic, possessor of more than 200 aviation records and the commander of the Women Airforce Service Pilots (WASP) during World War II. Cochran left school when she was eight to work in a textile factory, became a beautician then a salon owner before she was twenty, moved to New York four years later and earned her pilot's license, becoming a flying saleswoman for her own cosmetics company. Some 25 years later, Cochran reached Mach 2--twice the speed of sound--in a Lockheed F-104, having already become a colonel in the Air Force Reserve. Intelligent, brash, determined, courageous, and ambitious, she counted presidents Eisenhower and Johnson among her friends, as well as national leaders in business, Congress, and military and commercial aviation.

Drawing upon previously unpublished information about Cochran's early years and her first marriage, and on her extensive correspondence with U.S. presidents, Air Force generals, aircraft designers, test pilots, and business tycoons, Rich shows Cochran's many contrasts. Seen by enemies as an egotistical master of self-promotion, she was nevertheless capable of loyal and abiding friendships. And although her personality was sometimes abrasive, she used it to accomplish impressive results, including her work on behalf of an independent Air Force. She actively opposed early feminists and, though she was responsible for the groundbreaking formation of the WASP, she was instrumental in delaying the acceptance of women as astronauts.

Rich brings clarity, detail, and objectivity to a life story that had until now remained vague, contrived from hearsay and controversy. This first extensive critical biography puts Cochran's great talents and achievements in the context of her turbulent personal life to create a portrait of a remarkable, complicated woman.

Doris Rich is a journalist and author of Amelia Earhart: A Biography, Queen Bess: Daredevil Aviator, and The Magnificent Moisants: Champions of Early Flight.

Rich reminds us that this remarkable lady, despite her shortcomings, reached Mach 2 - twice the speed of soung - piloting a Lockheed F-104 at the tender age of 58. Her craftsmanlike biography of an altogether complex and controversial personality is highly recommended…
--Library Journal

…the extensive, complicated story of her life, compiled… Often combative and abrasive, Cochranis a true American legend, and Rich's biography will ensure that Cochran's contributions will not be forgotten.
--Florida International Magazine

…Jackie Cochran is a name that more people should know.
--Plane and Pilot

In Doris Rich's latest aviation biography, barefoot, illiterate Bessie Pittman reinvents herself as Jacqueline Cochran, the brash beautician who set more speed and altitude records than any pilot in history. …Rich illuminates herself the lesser-known facts of this under-appreciated pioneer and lights a belated candle for her too.
--Air and Space

Often combative and abrasive, Cochran is a true American legend, and Rich's biography will ensure that Cochran's contributions will not be forgotten.
--Booklist

…this book reveals more candid insight into the life and psyche of a legendary American aviatrix than most of us wanted to know, and as such, it has a place in any complete home aviation library.
--Skyways

" Rich is a perceptive author and researcher-she dose not glorify Cochran and indeed succeeds in debunking a few myths about her subject. It is to the author's credit that she has written such an enjoyable and unbiased biography of a difficult, complex, and occasionally unsympathetic subject."
--H-Net Reviews

Doris L. Rich has researched her subject conscientiously and has not refrained from poining out the character flaws of the woman who tried to deny the existence of her family as she transformed herself from poor little Bessie Pittman to the world-famous pilot Jacqueline Cochran.
--The Aerospace Professional

"An in-depth look at one of America's most accomplished aviators. The book provides a good introduction to the flamboyant aviator and may encourage other works on her particular accomplishments. Doris Rich certainly makes Jackie Cochran come alive."
--Register of the Kentucky Historical Society

" Rich's work is an impressive achievement. Well-researched and informative, it provides new information and insight into a complex figure."
--H-Net Reviews