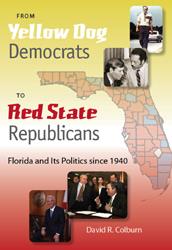 From Yellow Dog Democrats to Red State Republicans:
Florida and Its Politics since 1940

"Penetrating and enlightening, a masterful study of Florida politics."--Gary R. Mormino, author of Land of Sunshine, State of Dreams: A Social History of Modern Florida

"In this sweeping overview of modern Florida politics, Colburn challenges the country's preconceived notions of the Sunshine State's political leanings.From Yellow Dog Democrats to Red State Republicans is the result of a lifetime of observing and analyzing a once small and rural state that has transformed itself, in less than fifty years, into a political powerhouse and national weathervane."--Reubin O’D. Askew, Governor of Florida, 1971-1979

"An insightful analysis of how the Democrats lost--and the GOP gained--the most important swing state in the nation."--Cynthia Barnett, author of Mirage: Florida and the Vanishing Water of the Eastern U.S.

Likely to raise hackles among Democrats and Republicans alike, this dynamic history of modern Florida argues that the Sunshine State has become the political and demographic future of the nation. David Colburn reveals how Florida gradually abandoned the traditions of race and personality that linked it to the Democratic Party. The book focuses particularly on the population growth and chaotic gubernatorial politics that altered the state from 1940, when it was a sleepy impoverished southern outpost, to the present and the emergence of a dominant Republican Party.

In the twenty-first century, Colburn says, Florida is a dynamic, highly partisan, largely conservative state at the cultural, social, and economic intersection of the Western Hemisphere. But the transition hasn't been entirely felicitous. Allegations abound that the state is a "banana republic" favoring the wealthy, a piece of paradise that embraces "immigrants, natives, seniors, rednecks, evangelicals, and yes, flim-flam artists and mobile home salesmen. All of whom came to the state looking for ways to improve their lot in life."

Colburn depicts the state's colorful governors at the center of every postwar development from Cracker to Sun Belt politics, from segregation to integration, from boosterism and modernization to economic and environmental crises. As the story of one of the most influential states in the nation, the book redefines Florida politics.

David R. Colburn is professor of history and director of the Askew Institute at the University of Florida.

" Colburn places Florida's gubernatorial politics since 1940 in the context of the state's remarkable cultural, economic, and demographic transformation. Recommended. All level/libraries."
--Choice

"His analysis and in-depth breakdown of the various gubernatorial contests from the 1940s through the present shed light on how Floridians not only chose their governors, but, more important, how power shifted from the Democrats to the Republican Party." "A useful resource for anyone interested in Florida's politics, both past and present."
--H-Net / H-Florida

"Useful for specialists, general readers, and undergraduates."
--The Journal of Southern History

"This is an impressive addition to the literature on Florida's history and politics."
--Tampa Bay History

"The example of Florida as articulated in these two books provides some valuable insights into politics in other states." "Winsberg's analysis of demography, ethnicity, and religion in Florida provides an effective backdrop for Colburn's analysis of the changing structure of Florida politics."
--Political Geography vol.29