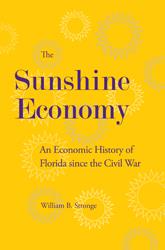 The Sunshine Economy:
An Economic History of Florida since the Civil War

"An authoritative, remarkably researched, insightful, and enjoyable economic history of Florida. Anyone seeking to understand where Florida is going will profit from reading this account of the state's path to the twenty-first century."--David Denslow, University of Florida

Before the Civil War, Florida's population hovered around 200,000. Over the next century, it increased dramatically, rising to just under three million by 1950. During the next fifty years, however, it exploded, increasing more than 500 percent to almost sixteen million. By the end of the twentieth century, the state had one of the nation's largest economies.

The Sunshine Economy traces the development of the industries that spurred this major growth. It describes how Florida progressed from being one of the least populated states in the country, with an economy based on forestry products and open-range cattle farming, to the fourth most populated state, with an economy based on sunshine, tourism, retirement, citrus, and vegetables.

William Stronge draws on the vast amount of statistical information available on Florida to tell the history of the remarkable transformation of the state's economy. His work is essential in understanding how Florida became a major national economic force. His insights highlight the significance of the tremendous reduction in transportation costs in driving much of the state's economic development. His perspectives also enrich our understanding of Florida's experiences during the Great Depression and the rampant inflation of the 1970s.

William B. Stronge is professor emeritus of economics at Florida Atlantic University.

" With its strong base in economic data, this book will be of interest to students and practitioners in this discipline."
--Book News Inc.

"Anyone with even a passing interest in Florida would be well advised to read it."
--Choice

"A meaningful addition to the reading list of every upper division and graduate level course in Florida studies, and an interesting addition to courses in southern studies, where it will provide a uniquely different perspective on the economic development of the Deep South. It will also be invaluable to business school courses focused on Florida."
--H-Net Reviews

"Takes the reader on an amazing journey through the economic transformation of Florida."
--The Journal of Southern History Vol. LXXVI, No. 4