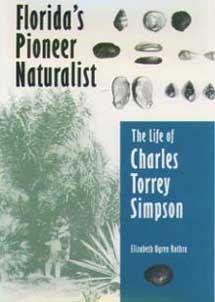 "Elizabeth Rothra's excellent biography of Charles Torrey Simpson restates his philosophies about the intrinsic value of natural ecosystems like the Everglades. No one knew better than he the history of the plants and animals of South Florida or conveyed it with more humor and enthusiasm."--Marjory Stoneman Douglas

"Absorbing, informative, and useful. . . . Simpson is the primary source of information for all scholars wishing to learn about ecological conditions in south Florida at the turn of the century."--Larry D. Harris, School of Forest Resources and Conservation, University of Florida

"A needed, timely contribution to scholarship in the form of a very enjoyable, readable volume. . . . Much of the natural wealth enjoyed by our citizens today is due to the early efforts of pioneer naturalists such as Charles Torrey Simpson, working in a 'labor of love' nearly a century ago."--David H. Stansbery, Curator of Bivalve Mollusks, Museum of Zoology, Ohio State University

Charles Torrey Simpson (1846-1932) settled in south Florida in 1902, a time when the vast expanse of islands and marshes that comprise the Everglades teemed with panthers, crocodiles, and great flocks of flamingos, egrets, ibis, herons, and wood storks. Simpson devoted his remaining 30 years to interpreting the subtropical plants and animals he found, becoming the environmental spokesman to the droves of settlers and tourists who invaded and developed the Sunshine State in the 1920s.
In this first full-length biography, illustrated with 34 photographs, Simpson takes his place in the galaxy of nature writers that includes his contemporaries John Muir and John Burroughs. Through his popular books, Simpson acquainted readers with a unique North American ecosystem. HisOrnamental Gardening, the first comprehensive guide to Florida's tropical plants, changed the way people landscaped their homes. He advocated the formation of a national park in the Everglades, encouraged the growth of Florida garden clubs, and wrote about his experience in the hurricane of 1926 in both personal and scientific terms.
An early investigator of the endangered Florida tree snail, Liguus fasciatus, Simpson explored more than 300 hammocks in pursuit of snails, tramping through woods and wading into streams until he was well past 70. "I cannot resist the call and must respond when I hear it," he wrote. "There's nothing like getting out after specimens to make a fellow feel he's really living."
Among malacologists Simpson is noted as the classifier of the pearly freshwater mussels, and his Catalogue, compiled when he worked at the Smithsonian Institution, is a major reference.
Though he was well known during his lifetime, little has been written about Simpson's formative years. Using letters, family histories, and Simpson's own writings, Elizabeth Rothra describes his development from a country boy to a distinguished authority on tropical horticulture and natural history, following him on field trips throughout the wilderness of Florida that existed almost 100 years ago.

Elizabeth Ogren Rothra compiled and edited a biography and anthology of the writings of Florida environmentalist John C. Gifford, On Preserving Tropical Florida, and has published freelance articles in magazines and newspapers. She has worked for Prentice-Hall Books and Radio Free Europe and was publicity director of the Chautauqua Institution in New York state. A resident of south Florida for more than twenty years, she now divides her time between Florida and southwestern New York state, where she is an active participant in the Jamestown Audubon Society.

"Splendid biography of Charles Torrey Simpson" "...offers a fascinating glimpse into what the Everglades were like as it became a national park."
--Stuart News (Stuart, FL)

"Rothra brings to life Simpson's long sweep of knowledge of the change from unspoiled wilderness he first experienced in the keys, hammocks, and everglades, to the clearing and filling of vast areas as development advanced inexorably....The story is well, intimately, and sympathetically told...."
--Choice

What a splendid read! What a wonderful biography of a man, a naturalist, with a zest for life and the environment - plants, shells, snails, all things of the Everglades, palms, plants, grasses and Flowers! ... Rothra has given a major contribution to naturalists and historians by her meticulous documentation of Simpson's life. And yet with all the details, she has woven a delicious story of a man in his late 70s and even late 80s passionate about his discoveries as he plodded through swamplands and woodlands in Florida ever looking for new things that had never before been talked about.
--Polk County News Chief

"Those who enjoy and cherish South Florida's natural environment -its peerless Everglades, pine-palmetto lands, waterways, hammocks and keys- and are concerned about protecting this subtropical/tropical paradise, will be especially grateful to Elizabeth Rothra, who has exhaustively researched and fully written the life story of Charles Torrey Simpson (1846-1932), 'the father of all South Florida naturalists.'" "a richly detailed portrait of the unstoppable and fascinating Simpson."
--South Florida History Magazine

"Florida's Pioneer Naturalist is an outstanding portrayal of an important field naturalist witnessing the changing environment of south Florida. Although the book will surely he of interest to historians, horticulturists and malacologists, the real strength of the book is the clear, straightforward style that makes it accessible and fascinating to the general reader." "An ardent environmentalist might suggest that this book be recommended reading for any south Florida resident, as well as any new residents as they move into the state."
--Florida Historical Quarterly