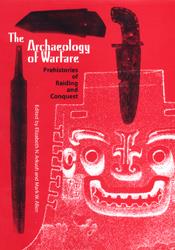 The Archaeology of Warfare:
Prehistories of Raiding and Conquest

"An excellent source of information on the current state of warfare research in archaeology. [It] chronicles the complex history of warfare in different time periods and world regions while simultaneously exploring the environmental and social variables that appear to have influenced if, when, how, and on what scale warfare was conducted."--Patricia M. Lambert, Utah State University

"The study of warfare (or slavery) in the archaeological record requires a level of synthesis, temporal depth, and relational analysis that challenges the abilities and knowledge of all archaeologists. This volume presents an intriguing set of essays that are more than up to this challenge in many world areas. . . . Archaeologists, avocational archaeologists, and general readers interested in warfare in different social and ecological settings will be eager consumers."--David R. Wilcox, Northern Arizona University

These essays explore the development of warfare in preindustrial, non-Western societies, addressing why some societies fight endemic wars while others do not and how frequent warfare affects the basic choices people make about where to live, whom to fight, on whom to confer power, and how to form social groups.
Archaeological research dispels the myth of a peaceful past and demonstrates the sobering fact that war played a greater role in human prehistory than previously thought. These detailed regional case studies from leading archaeologists show the inextricable web of warfare and other social institutions and highlight their complex co-evolution in pre-state and early state societies.

The volume includes chapters on the pre-Columbian cultures of North America of the last millennium, the origins of statehood in Mesoamerica and Neolithic China, a centuries-long sequence of warfare in Andean South America, warring peoples of Oceania, and East African cultures devastated by the slave trade. In addition, the contributors offer new insights into how to study warfare in the past and point toward new directions in this field.

Elizabeth N. Arkush is research associate in the Cotsen Institute of Archaeology at the University of California, Los Angeles. Mark W. Allen is associate professor of anthropology at California State Polytechnic University, Pomona.

"Addresses not only the question of whether warfare has been ubiquitous during the human past, but also its causes and the consequences for social change, espeically the development of cheifdom and state societies."
--New Scientist

…a useful collection of essays…well-edited and refreshingly jargon-free; a good addition to the library of war in archaeology.
--Antiquity 81

" This volume has a great deal to offer archaeologists who are interested in ancient warfare."
--The Journal of Military History

" Filled with useful information and ideas. Very well-written and finely edited. An excellent set of case studies and a good catalogue of evidence. A lengthy and up-to-date bibliography that is invaluable to anyone interested in the history and prehistory of war."
--Journal of Anthropological Research

"This outstanding volume will certainly fuel increased interest in the systematic study of warfare in prehistory. By pursuing such topics, archaeologists can provide much needed long-term perspectives on this very real, if deplorable, aspect of human existence."
--The Historian

Hillforts of the Ancient Andes: Colla Warfare, Society, and Landscape