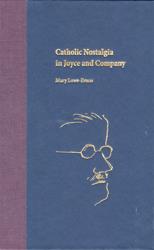 Catholic Nostalgia in Joyce and Company

"In this perceptive and original study, Lowe-Evans explores Joyce's complicated response and return to his Catholic upbringing and then demonstrates how Joyce and that response influenced subsequent writers as diverse as Thomas Merton and F. Scott Fitzgerald."--Roy Gottfried, Vanderbilt University

Although numerous critics and scholars have considered the influence of Joyce's Catholicism on his works, most seem to have concluded that Joyce's intention was to subvert the church's power. Mary Lowe-Evans argues, on the contrary, that the net result of Joyce's Catholic nostalgia is an entanglement in rather than a liberation from the labyrinthine ways of theological exposition and Catholic ritual and politics, which has inspired in his readers an enduring admiration for institutional Catholicism.

Lowe-Evans explores the ways in which specific Catholic rituals and devotions vigorously promoted by the Catholic Church during the "Crisis in Modernism" (1850-1960) caused a nostalgic reaction in Joyce that informs and permeates his work. She also traces the subtle and direct influence Joyce had on the Catholic thinking of a diverse group of subsequent writers. She demonstrates that Joyce and F. Scott Fitzgerald seem to effect this nostalgia in their work in spite of themselves, while Flannery O'Connor and Thomas Merton purposely elicit it. Lowe-Evans discusses Joyce's enduring belief in the immortal soul and the religious faith and doubt of Merton with great sensitivity, broadening the appeal of the study.

Mary Lowe-Evans is professor emerita of English at the University of West Florida.

" The 15-page conclusion should be required reading for everyone in the field of comparative literature, for it speaks to translation as interpretation and as creative transfer, and to the fact that good translators ought to be recognized for what they are: good writers. Comparatists whose work embraces Latin American literature will need this book."
--Choice

"A significant contribution to critical method as well as to Joyce studies."
--Book News Inc.

"In this fascinating book, Mary Lowe-Evans challenges the fairly standard view that the effect of Catholocism on James Joyce's work was essentially one of reaction against it, to subvert the church."
--Literature and Theology

"Mary Lowe-Evans's engaging and original study of what she refers to as Joyce's "Catholic nostalgia" is a welcome indication that new kinds of critical engagement with the question of Joyce and religion are on their way."
--James Joyce Quarterly