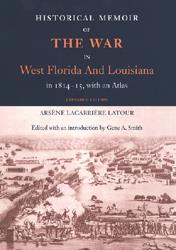 Historical Memoir of the War in West Florida and Louisiana in 1814–15 with an At:
Expanded Edition

Edited with an Introduction by Gene Allen Smith

Widely regarded as the best eyewitness account of the Battle of New Orleans, Arsène LaCarrière Latour’s Historical Memoir records first-hand the dramatic events of the climactic military campaign of the War of 1812. This revised and expanded edition includes a substantial new biographical introduction based on a group of manuscripts relating to the battle recently acquired from Latour’s descendants in France.
Only months after the battle ended, Latour, who was General Andrew Jackson’s principal army engineer, began interviewing witnesses and key participants in order to create a comprehensive record based on first-hand accounts. The work’s most significant value derives from these accounts--reproduced in the book's appendix--by numerous individuals who participated in a crucial moment in the history of the United States.
As the first full-length treatment of the New Orleans campaign, the book also offers perceptive analysis of battle preparations, terrain, and strategy by the man who designed many of the American defenses. This edition also includes nine three-color foldout maps illustrating the course of the battle. Latour characterized it as a conflict "which preserved our country from conquest and desolation." As a key figure in the conflict who knew many of the other main actors and personally collected their reports and observations, Latour provides a record that will never be replaced.

Gene Allen Smith is associate professor of history at Texas Christian University in Fort Worth.

"Scholars and students of the War 1812 and the United States military in the Early Republic will value this new edition of Latour's story. It is an important resource for understanding the chaotic and occasionally haphazard organization of the United States Army in the early national period. It is also a whopping good story."-- Journal of Military History
--Journal of Military History

"An invaluable firsthand account of the military campaign that culminated in the Battle of New Orleans. Latour's narrative is especially worthwhile to historians because it was written so close in time to the events it describes. His book, now published in such a beautiful manner, should long be consulted by readers interested in the War of 1812" - Southwestern Historical Quarterly
--Southwestern Historical Quarterly

"The Historical Memoir provides a very detailed and reliable chronological narrativve of the operations of Jackson's army between September, 1814, and March, 1815, written from the perspective of an American staff officer. In sharp contrast to other War of 1812 military memoirs, the text is largely free from pretension and exaggeration, and more than one hundred pertinent documents are reproduced in the massive various battlefields, his vignettes of the combat experience of individuals and units, and his overall familiarity with the campaign's geographical and historical context that stand out and give the Historical Memoir its special appeal for both military historians and general readers. University Presses of Florida and the Historic New Orleans Collection have produced a fine, reasonably priced, and well-produced addition to the military history of the Gulf Coast. Major Latour would be pleased." -Louisiana History
--Louisiana History

Nexus of Empire: Negotiating Loyalty and Identity in the Revolutionary Borderlands, 1760s–1820s