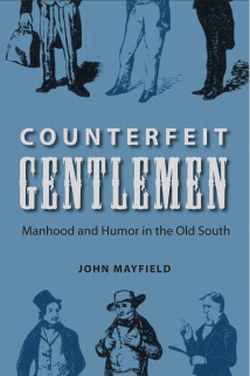 Counterfeit Gentlemen:
Manhood and Humor in the Old South

"John Mayfield’s study of Southern humor and humorists will soon stand with such classic works as those by William R. Taylor and Michael O’Brien in the realm of southern letters. With a compelling theme about the nature of upper-class southern male identity before the Civil War, his close examination of a shrewd selection of authors will win wide acclaim from all who are serious students of Southern culture."--Bertram Wyatt-Brown, author of Southern Honor

"Counterfeit Gentlemen captures a volatile region laughing (uneasily) at itself, and it is the freshest interpretation of the Old South to come along in a decade. It is a sophisticated analysis of the social functions humor performed and the social anxieties it reflected in a specific moment in a specific time that came and went with the wind."--Stephen Berry, author of All That Makes a Man

Counterfeit Gentlemen is a stunning reappraisal of Southern manhood and identity that uses humor and humorists to carry the reader into the very heart of antebellum culture.

What does it mean to be a man in the pre–Civil War South? And how can we answer the question from the perspective of the early twenty-first century? John Mayfield does so by revealing how early nineteenth-century Southern humorists addressed the anxieties felt by men seeking to chart a new path between the old honor culture and the new market culture. Lacking the constraints imposed by journalism or proper literature, these writers created fictional worlds where manhood and identity could be tested and explored.

Preoccupied alternately by moonlight and magnolias and racism and rape, we have continually presented ourselves with an Old South so mirthless it couldn't breathe. If all Mayfield did was remind us that Old Southerners laughed, he would have accomplished something. But he also offers a sophisticated analysis of the social functions humor performed and the social anxieties it reflected.

John Mayfield, professor of history at Samford University, is the author of The New Nation, 1800-1845 and Rehearsal for Republicanism: Free Soil and the Politics of Antislavery.

"Provides generous helpings of Southern humor to explain how these upper-class male identities were preserved in an era of slavery, shifting codes of conduct and unbridled capitalism."
--Book News

"Succeeds at blending history, cultural studies, and literary criticism." "The writerly moves Mayfield makes deserve special mention. He not only adeptly recovers these humorists' role in southern culture but also evokes the tenor of their works. His writing, like theirs, is witty, ironic, and provocative. Counterfeit Gentlemen offers an example of experimentation in prose style that more scholars ought to consider."
--Journal of American History

"This exploration into the complexities of manhood in the Old South suggests new and intriguing avenues for future scholars."
--Florida Historical Quarterly

"A rich, provocative examination of the ideals and dilemmas of masucilinity in the amtebellum South. Engagingly written, Counterfeit Gentlemen is an important book and a valuable contribution to our understanding of the antebellum South."
--The Journal of Southern History Vol. LXXVI, No. 4

"A rich new source in the underexplored field of Southern manhood. Mayfield's narrative style is a combination of insight, information, and wit and is as fun to read as it is rewarding."
--Studies in American Humor New Series 3, No. 22

"Mayfield's analysis provides invaluable insight into how southern men, in particular, thought about and understood the frontier's challenges."
--The Alabama Review

"Mayfield's study provokes plenty of thought on the construction of southern manhood and the use of humor to destabalize that construction. He combines his deft use of biography with a keen eye for interpreting the primary texts. His points are direct and and his style very amiable, but the content evokes thought and acknowledges the complexity of the topic. Counterfeit Gentlemen provides provocative analysis and furthers the conversation of a topic that has received some critisal treatment, but Mayfield gives the topic that extra attention it deserves."
--H-Net Reviews: H-Southern-Lit