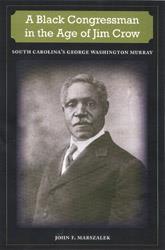 "Through the political biography of George W. Murray, one sees the myriad forces arrayed against southern Republicanism in the late nineteenth century and also witnesses the trials and tribulations one of the major African American political leaders faced in the quest for racial justice in the new South."--Bernard Powers, College of Charleston

Born a slave in 1850s South Carolina and elected to Congress in the 1890s, George W. Murray appeared to be the antithesis of the African American male in the Jim Crow South and served as a beacon for African Americans who saw their hopes crushed in the aftermath of the Civil War. Early in the twentieth century, however, tragically defeated by corrupt Reconstruction politics and white supremacist attitudes he could not escape, Murray was driven from office and from the state. Drawing on extensive research to reconstruct Murray's life story, Marszalek defines an age and its people through the compelling battle of one man and shows how and why the nation's efforts to reconstruct the South into a biracial democracy failed.

Murray's career, which spanned a quarter of a century, included two terms in the U.S. House of Representatives and leadership of South Carolina's Republican party. He was an investor as well as a landed property owner who sold tracts to poor blacks in order for them to qualify to vote. But by the beginning of the twentieth century, with his party in shambles, he found himself on trial for alleged forgery in a land deal with two of his black land purchasers. Murray was found guilty, and the South Carolina Supreme Court upheld the verdict. Sentenced to hard labor on a chain gang, he escaped to Chicago where he spent the rest of his life in obscurity.

In this old-fashioned political biography, Marzalek makes an important contribution to both South Carolina and African American history. … his ability to reconstruct the life of the obscure Geroge Washington Murray, even briefly, is an impressive accomplishment.
--American Historical Review

This fine contribution to the understanding of Murray's times deservedly resurrects its subject.
--Choice

…makes a useful contribution in its chronicling the important and sometimes controversial role played by prominent black politicians like Murray in the era of disenfranchisement and Jim Crow.
--Journal of Southern History

" A highly useful contribution with his excavation of the political career if an important but untill now neglected African American politician of the Jim Crow era."
--Louisiana History

"This biography opens a fascinating window into black political life in the context of the Jim Crow South, and will be of interest to specialists in the political history of the region, and South Carolina especially, while students of African American history will be rewarded as well."
--H-Net

"Stands as a critical biography for students and scholars of the New South, lending depth to existing works on the complicated dynamics within the two major parties and the ways in which African Americans, most notably Murray, attempted to use those divisions to gain independent leverage for African Americans, as their rights were being either squashed outright or quickly stripped away."
--The South Carolina Historical Magazine