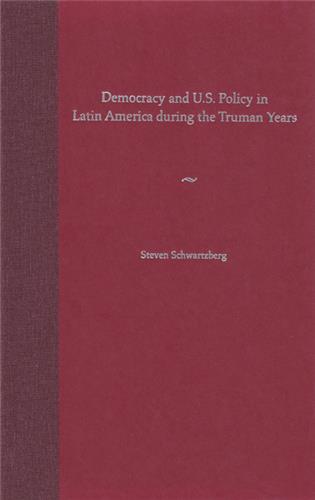 Democracy and U.S. Policy in Latin America during the Truman Years

“A work of solid scholarship that challenges the notion of the United States as the ‘rampant eagle’ in its relations with Latin America . . . will appeal to specialists in Latin American studies, U.S. diplomatic history, and international relations, and will likely make the required reading lists of graduate students in these fields.”--Charles D. Ameringer, Pennsylvania State University

Contrary to analyses that emphasize the growing Cold War rivalry in examining Latin American developments after World War II, Schwartzberg demonstrates that these superpower tensions were not the only influences in the post-1945 world. He richly documents social and political developments in Latin American countries, illustrating the receptivity of politicians, journalists, and others to U.S. initiatives and interventions in support of democracy. He also provides material on the emergence of CIA support for the democratic left and shows how Cold War considerations were associated with support for democratic and reformist movements generally.

Schwartzberg challenges works that are strongly critical of U.S. policy in Latin America and documents his vision of the “civility of Yankee Imperialism” with a substantial array of archival and primary document material. He offers a new perspective on the motives of American officials and Latin American leaders, demonstrates the inadequacy of traditional conceptions of the influence of the Cold War in the region, and suggests an underlying unity in American global policy. He also shows that there was much greater autonomy in Latin American politics than diplomatic historians have previously recognized and that political leaders and developments in the region played a far more significant role in shaping American policy than Latin Americanists have previously perceived.

In a thoughtful, reasonable analysis, Schwartzberg challenges revisionist historians who portray US Cold War policy toward Latin America as imperialist and reliant on covert operations or military intervention, often in support of pro-US dictators. He focuses on Americans posted in Latin American capitals and ranges from Peron's Argentina to Haya de la Torre's Peru and Betancourt's Venezuela, with briefer stops in Costa Rica, Cuba, Brazil, Ecuador, and Guatemala. Schwartzberg finds that during Truman's presidency, policy reflected less the imperatives of the Cold War than the desire to encourage democracy. --Choice
--Choice

"A refreshing return to an earlier generation of American diplomatic historians. . . . A bold challenge to other historians who are quick to criticize and reluctant to put their own values and policy prescriptions on the line."
--The Journal of American History

"This is an important book that will benefit all those interested in Latin America and U.S. diplomacy . . . The book provides a valuable historical framework and set of lessons for those who, as Schwartzberg puts it, 'place a high value on democratic solidarity and respect for national sovereignty [as] . . . part of the common culture of the modern world.'"
--Hispanic American Historical Review

"Democracy and U.S. Policy" brings to life a unique group of diplomats who, Schwartzberg effectively demonstrates, believed that the time was right for cooperation between hemispheric governments on the basis of the ideology that had just won World War II.
--The Americas