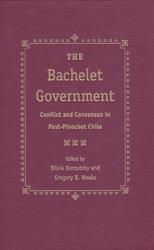 The Bachelet Government:
Conflict and Consensus in Post-Pinochet Chile

Silvia Borzutzky and Gregory B. Weeks

"Discusses and analyzes the successes and failures of this woman who rightfully earned a distinguished place in history books even before she assumed the presidency."--Patricio Navia, New York University

Michelle Bachelet was the first elected female president of Chile, and the first women elected president of any South American country. What was just as remarkable, though less noted, was the success and stability of the political coalition that she represented, the Concertacion. Though Bachelet was the fourth consecutive Concertacion president, upon taking office her administration quickly faced a series of crises, including massive student protests, labor unrest, internal governmental divisions, and allegations of ineptitude and wrongdoing as a result of a major reorganization of Santiago's transportation system.
Candidate Bachelet promised not only different policies but also a different policymaking style--a style characterized by a kinder and gentler approach to politics in a country with a long tradition of machismo and strong male rulers. Bachelet promised to listen to the people and to return power to those who had been denied it in the past. Her attitude enhanced the influence of existing social movements and inspired the formation of new ones.
The Bachelet Government is the first book to examine the policies, political issues, and conflicts of Bachelet's administration, and the first to provide analyses of the challenges, successes, and failures experienced by the Concertacion since 1989.

Silvia Borzutzky, teaching professor of political science and international relations at Carnegie Mellon University, is coeditor of After Pinochet: The Chilean Road to Democracy and the Market and author of Vital Connections: Politics, Social Security, and Inequality in Chile. Gregory B. Weeks, associate professor of political science at the University of North Carolina Charlotte, is the author of The Military and Politics in Post-Authoritarian Chile and U.S. and Latin American Relations.

For those of us who are specialist on Chile, the careful and comprehensive sector-by-sector analyses provides in this volume are gems, unique both as a unified narrative of Bachelet's election and initial performance and in the expertise each author brings to her or his chapter. The use of consensus and conflict as analytical anchors from which to view postauthoritarian Chile is both innovative coherent.
--Latin American Politics and Society

"The various chapters of the book present well-founded criticisms of democratic government in Chile; the themes chosen by the editors, and the overall high quality of the chapters make this an important contribution to our understanding of the nature of democracy in Chile."
--The Journal of Latin American Studies

"The message of this excellent volume is not that blaming old structures, condemning the legacies of dictatorship, or finding the cause of all evils in the unfortunate ups and downs of the global marketplace should satisfy us. Instead, the authors show that we need to consider past and present factors and link those to the Chilean political trajectory to make sense of current inadequacies."
--H-Net Reviews