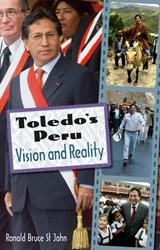 "Anyone interested in the problems of building successful democracy and achieving meaningful development will find this balanced analysis of Toledo's strengths and weaknesses useful."--Charles D. Kenney, University of Oklahoma

"Combines in-depth interviews with contemporary accounts to provide the first full-length study of a Peruvian government that, in spite of its many limitations, often self-induced, deepened the market economy while restoring democratic practices."--David Scott Palmer, Boston University

Alejandro Toledo was elected president of Peru in 2001, ending the corrupt rule of Alberto Fujimori. Limited to a single term, Toledo capitalized on his indigenous roots and his identification with the lower and middle classes. Enjoying widespread support when he took office, by mid-term Toledo suffered approval ratings even lower than Fujimori's. By the time the 2006 elections took place, Toledo's popularity was among the highest of any outgoing president in the history of Peru.

Ronald Bruce St John explores the policies of the Toledo administration to discover why his presidency was such a roller coaster ride. He examines the various tent poles of Toledo's political platform, concluding with a "report card" that tallies the successes and failures of Toledo's presidency. St John was granted unprecedented access to Toledo and his closest advisors, and he has used those interviews along with a wealth of other primary documents to reveal fascinating insights into the rule of a man eager for Peru to transition from an authoritarian government to a true democracy.

Ronald Bruce St John is an independent scholar and consultant. His publications include The Foreign Policy of Peru and Libya: From Colony to Independence.

This useful study of the presidency of Alejandro Toledo (2001-6) is based on extensive interviews with the president and members of his administration, an impressive array of journalistc accounts, and many secondary sources.
--Latin American Politics and Society

This book is a lucid, thorough account of the government of Alejandro Toledo, who was Fujimori's strongest challenger in a rigged election in 2000 and won an election in 2001.
--Foreign Affairs

A serious and fair assessment of a presidency that raised many hopes but disappointed as much as it pleased.
--The Americas