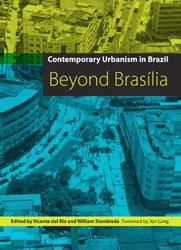 Contemporary Urbanism in Brazil:
Beyond Brasília

"This outstanding, well-crafted, and highly original volume makes a strong case for viewing Brazilian urbanism as a cutting edge laboratory of urban change not only in Latin America but also in cities across the planet."--Lawrence A. Herzog, San Diego State University

"A landmark study. . . . Amply demonstrates that the city is a tool to achieve social equity; that place, design, and sensitivity to multiculturalism matter; and that participatory democracy is forged through experiencing and designing the urban realm."--Peter M. Ward, University of Texas, Austin

For decades, a succession of military regimes and democratic governments in Brazil sought to shape the future of their society through the manipulation of urban spaces. Planned cities were built that reflected the ideals of high modernism, and urban designers and planners created clean-cut minimalist spaces that reflected the hope for an idyllic future in a still-developing nation. But these cities were criticized as "utopian dreams" in a country plagued with the urban realities of rampant sprawl and the infamous slums known as favelas.

In this international collection of essays, architects, urban planners, and scholars assess the legacy of Brazilian urbanism to date. They evaluate the country's experiments with modernism and examine how Brazilian cities are regenerating themselves within a democratic political framework that meets market and social demands, and respects place, culture, and history.

"This is a clearly presented hardback volume carefully referenced with an extensive bibliography and is mercifully free from jargon. It must be in any reference library."
--Urban Design International

"The careful analyses are the bases for both positive reflections and criticisms of what is happening in present-day Brazil."
--Urban Morphology

"This book has the merit of stitching together 12 articles that deliver a clear picture of what happened in Brazilian cities after the 1960's."
--The Americas 67:2