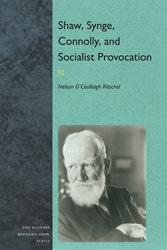 "With great skill, Nelson O`Ceallaigh Ritschel has constructed a gripping intellectual narrative out of the Irish national debate over socialism that led to the Easter Uprising of 1916."--John A. Bertolini, author of The Playwriting Self of Bernard Shaw

"Ritschel’s reputation as one of the most insightful writers on the interplay of early Irish theatre and the broader culture within which it operated is confirmed again by Shaw, Synge, Connolly, and Socialist Provocation."--Gary A. Richardson, author of American Drama

George Bernard Shaw has always been regarded as a political provocateur and socialist with ideas that reflected a complicated public philosophy. Scholarship abounds on Shaw’s politics, but Nelson Ritschel’s compelling study is the first to explore how Shaw’s presence in Irish radical debate manifested itself not only through his direct contributions but also through the way he and his efforts were engaged by others.

Nelson O`Ceallaigh Ritschel, professor of humanities at Massachusetts Maritime Academy, is the author of Synge and Irish Nationalism.

"The upshot of Ritschel's nuanced argument is that Shaw, both directly and indirectly, helped shape the development of belligerent socialism in Ireland through his provocations with Synge and Connolly."
--Choice

"Solidly researched and confidently moving between text and context, providing fresh perspectives and intelligent analysis, and making some surprising and convincing links between Shaw, Synge, and Connolly, Ritschel's book should be read by anyone whose interests lie in the period it covers."
--Irish Studies Review

"Essential reading for theatre historians and scholars of Irish studies wishing to situate Shaw within a critical period of Irish history and political history."
--English Literature in Translation

an "excellent study, which for the first time highlights the part Shaw played on the road to Irish independence"
--Shaw: The Annual of Bernard Shaw Studies

"Breaks new ground…Ritschel has uncovered a rich vein of Irish theatre history that has heretofore been presented piecemeal or upstaged by the overpowering achievement of the Abbey theatre with its ties to the illustrations Yeats and Lady Gregory."
--Text and Presentation